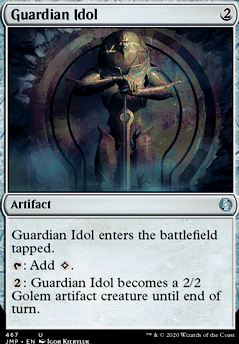 Guardian Idol occurrence in decks from the last year

Darkshadow327: Thank you for your suggestions! I've been considering ramp spells over mana rocks for a while, but they just don't fit with any theme. I realized after playtesting with the new rocks and less tutors that I wasn't always able to execute my gameplan so I've removed all but two rocks and put in better tutors than before, cutting down on mana costs severely.

bushido_man96: So after testing, the deck couldn't always pull of my gameplan in games, which sort of defeats the point of the deck. So I decided to revert, but I kept Guardian Idol and Vessel of Endless Rest because tey represent the King Caesar statue used to summon him in the movie. The other rocks were removed for cheaper, sleeker tutors, which combats the decks slowness, and therefore it's need for ramp.

As per some Reddit cross post suggestions, I have removed Fascination and Guardian Idol in favor of Cryptic Gateway and Epiphany at the Drownyard, Adding a little more utility as well as spreading the CMC out a little more. Thanks for the input so far!