You may cast Gravecrawler from your graveyard as long as you control a Zombie. 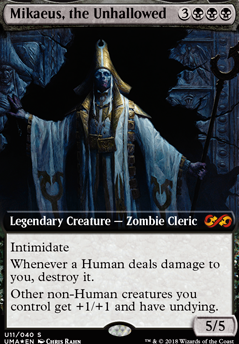 This deck is crying out for a playset of Gravecrawler. Itâs a staple that would excel here. Iâd seriously consider making room for it.

Ok i suggest some cards then to improve your game plan further. The most valuable card for recursion is Gravecrawler there is almost no other card in modern that can be played that easy again from graveyard.

For it to be played that way you need some good zombies to play and you also need a sac engine something to sacrifice it to. A very good zombie who also is a Sac Engine would be Carrion Feeder.

Next Cards would be your enablers the thing that does the damage like currently Ayara, First of Locthwain those would be Blood Artist and Zulaport Cutthroat. Both deal damage if a creature you control/or your opponent controls dies.

There are many more valuable Cards to choose from but those are not that pricey and would make a great addition to the deck.

You may want to cut some of the high cost spells and Underworld Dreams.

Zombie Deck For The New

Zombie decks work best with some type of recursion. Gravecrawler and Relentless Dead are staples of the tribe for good reason.

Krrik is awesome! I spent many hours brewing him up. Anyways, Sensei's Divining Top and Bolas's Citadel are both amazing includes and give you a 3 piece combo that goes with Aetherflux Reservoir. Additionally, Leshrac's Sigil gives you some pretty neat lines aswell as a black spell to grow krrik in a pinch. Theres even a zombie combo you can do; you just need Carrion Feeder and Gravecrawler and if you have out reservoir you got infinite life and a really big feeder :) tutors like Demonic Tutor and Vampiric Tutor are a bit pricey but make the deck flow so much better.

If I were to make a recommendation, Iâd drop the The Scarab God down to 2, and increase Gravecrawler and/or Relentless Dead up to 4 copies. Youâre going to want the cheaper and recursive centric zombies early on, so ideally youâll have full play sets.