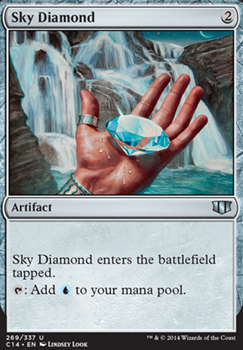 Sky Diamond occurrence in decks from the last year

manbearpig90, I care less about the initial cost of a mana-generating artifact and more about how long it takes to pay itself back.

For example, Arcane Signet, Gilded Lotus and Thran Dynamo each take only two turns to pay themselves back, so I have them in nearly ever EDH deck that I have built, but the artifacts in the diamond cycle (Sky Diamond, Charcoal Diamond, and so forth) take three turns to pay themselves back, so I do not use them; the one exception to that is Chromatic Lantern, because of its amazingly useful ability (and the fact that it can be used immediately, whereas the diamonds cannot be, also helps).

Darling it's Better, Down Where it's Wetter

Personally I would add these cards:

Izzet It Ironic, Don't You Think?

Nice list. I'm not sure if you have a budget for this list but it looks like a budget deck to me so I won't suggest anything I think is expensive. Maybe you could fit some extra turn spells into the list. I like to run Karn's Temporal Sundering and Part the Waterveil. They are budget options and if you can copy them with Ral or something you can have some explosive turns. You might want to add some more mana rocks if you have them laying around. Niv Mizzet mana cost is pretty intense, I find that the rocks that make colorless mana with this commander can be rough. Izzet Signet, Wayfarer's Bauble, Fire Diamond and Sky Diamond are all pretty nice rocks that aren't too expensive but I would understand if you couldn't get your hands on them. Burnished Hart is a pretty nice creature that you might be able to slot in. The only other suggestions I would make are for if you ever plan on upgrading it. I would upgrade Repeated Reverberation or Doublecast for Reverberation. It's the instant version of doublecast and you can cast it on opponents' spells as well. I really like Leyline of Anticipation with Niv. It can make everything you play so versatile. Even if you don't plan on upgrading it or adding anthing i suggested, this deck will probably be a lot of fun. I love my Niv Mizzet deck so I'm sure you will have fun playing yours.