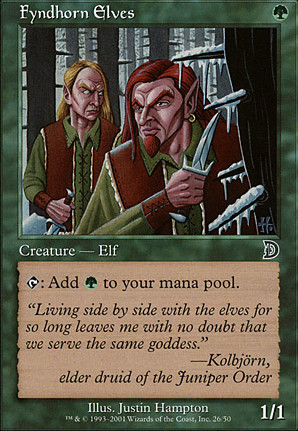 Constant Mists with a Crucible of Worlds + Life from the Loam package is fairly thematic and effective. A Crop Rotation to snag up your Glacial Chasm will do wonders when facing down those pesky aggro decks. I'm also a big fan of Wilderness Reclamation and Quest for Renewal (assuming you can add in more dorks) Noble Hierarch, Elvish Mystic, Llanowar Elves, Priest of Titania, Fyndhorn Elves and Avacyn's Pilgrim typically get the ball rolling consistently :)

This was a pet commander for me for a long time. I loved getting him out early. Llanowar Elves, Birds of Paradise, Elvish Mystic, Wild Cantor and Fyndhorn Elves have always been mvps for me. Lotus Petal helps out too but I've moved away from that now that I got Chrome Mox. Free creatures like Peregrine Drake and Cloud of Faeries make, making animar big a snap but definitely can start getting into the degenerate territory if you couple them with other things like Cloudstone Curio or Aluren (this seems like it's meant to be more casual but I figured I'd suggest some of the cool high end options too)

I always make a similar recommendation to decks like this: You shouldn't have this many 1 and 2-ofs. It's fine for a starting point, but the goal should be to have a core of 3 and 4-ofs that you always want to draw. That's your game plan.

The elf lords that DeinoStinkus mentioned would be good 3 or 4-ofs, especially 3-mana ones. Elvish Champion and Elvish Archdruid are easy 4-ofs that buff your team and provide mana.

However, there are some other core elf pieces that should be 4-ofs:
Priest of Titania
Elvish Clancaller
Dwynen's Elite (because it's a 2-for-1 elf maker)

And, if your friend wants to make this deck faster, he should consider the one-drop elves. The key to an elf deck is to have as many elves as possible as quickly as possible. The one-mana mana-dork elves are perfect because they come down early, and replace themselves in mana:
Fyndhorn Elves
Elvish Mystic
Llanowar Elves

Lastly, instead of pump effect spells, you should let the lords (Champion, Archdruid, and Clancaller) do the buffing. The bane of green is always boardwipes and falling behind on spells, so consider something like Beast Whisperer for card draw and Heroic Intervention (which is probably the most expensive card I've recommended so far) for protection.

I hope that helps! My last piece of advise is to check out other mono-G elf decks on the site to get a good sense of what the deck should be doing.