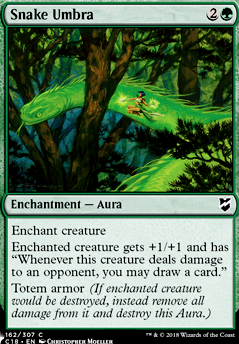 Enchanted creature gets +1/+1 and has "Whenever this creature deals damage to an opponent, you may draw a card."

Rot And Ruin
by Overzealousowl 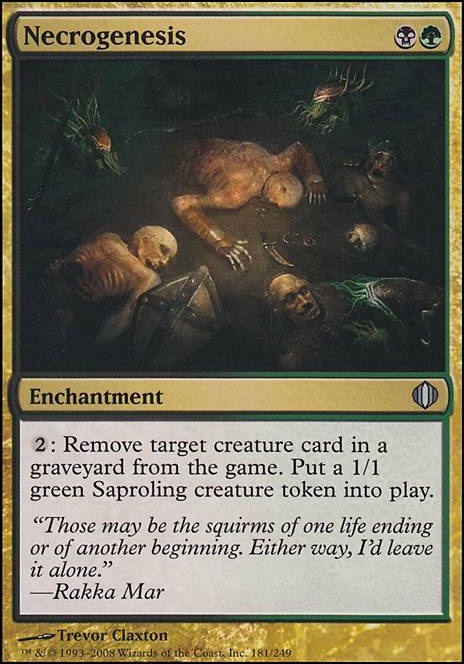 Keen Sense and Snake Umbra are very strong with Slimefoot. They make it so that you draw 3 cards for every 1 saproling that dies.

Ammonium Nitrate Under the Lebanese Sun

Karn's Bastion and Evolution Sage are solid inclusions for upping your spore counters.

You could improve your mana rock section, going with more 2 mana rocks. I rarely find Chromatic Lantern to be that useful in a two-color deck. Or, you could go in on land ramp with cards like Rampant Growth, a Wayfarer's Bauble, and even Summer Bloom can be useful. Since Slimefoot costs three to cast, I'd try to keep my ramp under 2 mana as much as possible, so I'd skip on cards like Cultivate and Kodama's Reach. Manalith and Darksteel Ingot are just not good.

I don't think Bontu's Monument is worth a slot here. You don't have many creatures to cast at all, and if it's not dead in your hand, it's going to be dead on your board. Lifecrafter's Bestiary will likewise not draw you many cards, and just having the scry isn't worth including it, in my opinion. Something like Vampiric Rites and Arguel's Blood Fast Â Flip will help you draw cards more reliably in your current build. Harmonize would be a better draw spell for you, too.

Last thing I noticed is your lack of sacrifice outlets. Slimefoot does damage when saprolings die, and the most consistent way to kill saps is to do it yourself. If your budget allows, the altars are a good place to start: Ashnod's Altar, Phyrexian Altar, and Altar of Dementia. If your budget isn't that friendly, there are other options. Evolutionary Leap is a cheap sac outlet that lets you trade a sap for a creature in your library. Phyrexian Ghoul and Nantuko Husk are similar creatures that are free sac outlets, and Carrion Feeder is another decent one. Viscera Seer provides good value, too. Going all in on Slimefoot's abilities lets you get benefit out of enchanting it with cards like Keen Sense and Snake Umbra.

You've got a nice start. Hopefully this helps you focus it in a bit better.