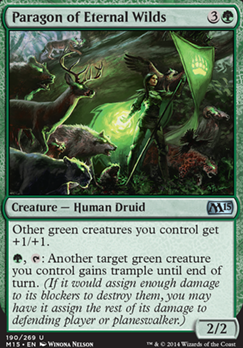 {G}, {T}: Another target green creature you control gains trample until end of turn. (If it would assign enough damage to its blockers to destroy them, you may have it assign the rest of its damage to defending player or planeswalker.)

Just snakes, no plains.
by Cam_M

Have a Beary Nice Time
by cordiaL

Ok. I've had so much fun playing around with the variant I suggested that I ended up updated the deck - dropped Flaxen Intruder, Dragon-Scarred Bear, and two copies of Paragon of Eternal Wilds. Added in Wild Beastmaster, more Syr Faren, the Hengehammer, and more Exuberant Wolfbear.

Good one seshiro_of_the_orochi. If you really want to up the synergy, sub in two more Syr Faren, the Hengehammer for Flaxen Intruder, four Wild Beastmaster for Ulvenwald Bear, and three more Exuberant Wolfbear for Paragon of Eternal Wilds. Syr Faren, the Hengehammer into Wild Beastmaster into Exuberant Wolfbear will give you a pretty sick attack step on turn 5 - especially if you throw in an Overrun. If I'm doing my math right, you'll have an 11/11, an 18/18, and another 18/18, all with trample.

The original artwork for Paragon of Eternal Wilds has squirrels on it: (http://www.artofmtg.com/art/paragon-eternal-wilds/) on top of the branch next to the lynx. I assume the animal next to the wolf to be a beaver.

I can't be sure, it might be a mouse but isn't that a squirrel in Paragon of Eternal Wilds? On the ground just under the wolf?

So it's 2am and kinda baked and didnt feel like really going through your creatures abilities right now but here are some cards I feel aren't needed.

Hall of Triumph, only giving +1/+1 for 5 seems underwhelming, but Paragon of Eternal Wilds this is better.

Spellbook, so you have good card draw but only running 1 card that allows max handsize seems kinda pointless. I dont think its worth and you could just replace it wit some bigass creature.

But on the subject of card draw this dude would be dope Beast Whisperer.

Wild Growth, i feel like there is better ramp.

I really like Wild Pair and would work a wincon or at least a few cards with synergy with each other for it.