I've been playing all styles of games for a very long time. I love to brew and build, but very few of my ideas actually pan out. Mostly, like 98%, of my decks are casual in their respective formats. However, I do build highly oppressive and extremely aggressive competitive decks from time to time. For me, I'd rather sit down with a bunch of friends and sling spells and have fun rather than lock everyone out of the game so I can "win".

Make no mistake, I definitely am a Timmy through and though. I do lean toward a Johnny quite strong as I do enjoy building decks that can actually win and I do get pumped over amazing cards, but at the end of the day it is the silly gimmick decks, the unplayable cards, and the fringe compilations that keep bringing me back. For example, while everyone is firing up their engines over Urza, Lord High Artificer and The First Sliver, I'm excited about Unbound Flourishing, Bogardan Dragonheart, and Morophon, the Boundless. Because of this, when I leave comments on decks or under FAQs, it's generally because I am seeing something that other users may be over looking. That's not to say I'm "better" - I'm not. It's that I tend to view cards differently, and that approach often opens up new methods of play style. I often find my success in winning comes from subverting expectations and going against the grain; If everyone expects a deck to look like and function like THIS, let's build a deck that does THAT instead and force them out of their comfort zone ;3

The formats I am interested in are the following, but this is not an all-inclusive list. While all formats listed are ones I am passionate about, there is special love in my heart for Oathbreaker as it combines the speed and cunning of Modern with the power and expansive lists of EDH.

I prefer formats with larger card pools; As such I am not a fan of Pre-release, Draft, Standard, etc.

I care. And I understand, to a certain degree, what you're dealing with. It doesn't seem like much, but knowing other are out there struggling with similar things is comforting to me.

I hope you're seeing a therapist and getting the help you need. Take care of yourself, friend!

I am another stranger on the internet, another voice lost in the wind, another ship passing at sea. But I still offer my sincerest sympathies for you, and in agreement total agreement with ZendikariWol, hope you're handling whatever was affecting you. :)

Now that we have Godzilla and her universe showcased in MTG as alternate special artwork, I was wondering what other content everyone would love to see, and where? Here is my personal weeb list:

We already got a 5e Module, so it feels right to have things like the Underdark (Dimir), have a Tarrasque (Gruul), Beholders (Rakdos), and all kinds of other goodies.

I think Tarkir can easily represent Outworld, and they both have Khans, clans and are war-torn worlds. Orcs could be used to represent Baraka, whomever replaces Zurgo can be represented by Shao Khan, you have the Jeskai who could show Sub-Zero's clan, etc.

Given that the Phyrexians "complete" life by augmenting machinery into themselves, I think DOOM is a beautiful fit. The horrific nature of both would be amazing.

Mesmerise - When Wall of Fruit blocks, tap the creature it is blocking. It doesn't untap during it's controller's next untap step.

Sometimes the sweetest things in life are also the most dangerous.

Wanted to make a new ability off the top of my head.

Wildcard, with a brand new ability :)

The artwork I got from that link was for Torment of Hailfire. Huh. Neat.

As you cast this spell, you may remove X loyalty counters from a Bolas Planeswalker you control.

If you removed X loyalty counters from a Bolas Planedwalker you control, you may return up to X creatures each with converted mana cost X or less from any number of graveyards to the battlefield under your control. They are black Zombies in addition to their other colors and types.

Make a Planedwalker with the name "Drat, Planar Gambler"

Currently there are 28 cards that care about or give Menace in Standard, not including what's in Ikoria.

And now we are getting 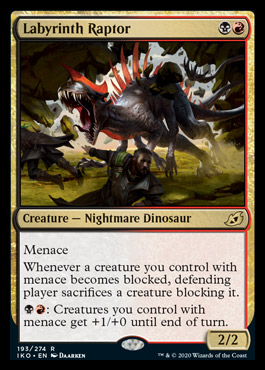 Makes me wonder if a "Menace Matters" deck will become viable?

Splash green for Jund and you have access to Assassin's Trophy, Bedevil, Cindervines as sideboard option, even Bone Splinters if you need it.

Sort of a Jund Midrange build.

When Wormcaller enters the battlefield, exile target graveyard. You gain life equal to the number of land cards exiled in this way.

Whenever a creature mutates, choose one -

Third modal option means if your opponent mutates several times during their turn, your first spell on your turn costs that much less.

Make an equipment fit for Ikoria

If you make it have the text line "Snow Artifact", it amplifies the power of it as that colorless mana is now snow mana, and thus can be spent to cast more Snow spells :)

Whenever you roll {CHAOS}, reveal cards from the top of your library until you reveal a creature card. Put it onto the battlefield tapped. Shuffle the rest into your library.

rdean14, was your list of cards in response to my design or someone else's? Lol I can't tell

ConstantVigilance lol the challenge was for more Companions from Ikoria. That's okay though

Companion - Your starting deck may not contain non-legendary creatures.

When Keshrah, Felidar Matriarch enters the battlefield, draw a card for each legendary permanent you control.

Oh hell yeah. Mono-white so you can fit her into most decks out there. Beautifully designed for Captain Sisay and Kethis, the Hidden Hand decks.

Make another one of these!!

I wonder if Vampire Hexmage will see some more play not? Probably not. I assume you'd just run spot removal in her place but hey, you never know.

Them: "Oh, nice! I can put trample counters on my creatures!"

Trample so hard you deal damage to the player at the other table, lmao

Like how is Mr. Otters worse than Snapcaster Mage? For one extra mana you copy the spell on the stack instead of returning it to your hand.

Either ban ALL cards with Companion, or none of them.

Hell, depending on the printings, any deck could contain at least one of them. This means most decks are 101 cards. Some might even be 102. I'm sure an aggressive player could squeeze out 103 in the right build.

I think if the "extra cards" is going to be the issue, a global ban on them as a whole needs to be evaluated.

I kind of agree, but kind of disagree.

While I get that it becomes an automatic include for any deck that contains Izzet (which are Izzet, Jeskai, Temur, Grixis, Glint-Eye, Ink-Trader, Yore-Teller and 5c for a total of 8 splashes), and while I also understand there is legitimately 0 downside (3cmc Flash to copy instant or sorcery), I also recognize it's a ONE TIME DEAL.

Wow, so you copy a single take extra turn spell. Big whoop. If you're going to be abusing extra turn gimmicks, you'd already be doing it with the density of spell doublers already in the game.

I don't think Mr. Otters brings anything new to the table, to be honest.

Anything else outside extra turns is small potatoes unless it's some giant X-cost Wincon spell. And if I were to copy spells, I'd start with Time Stretch + Howl of the Horde for a total of seven back-to-back turns.

So, I guess you could sum my deckbuilding philosophy as "Go big or go home" ;)

I consider it an epic win if I can flood the boardstate with a bagillion tokens, get wrathed and make even more. Tokens are my #1 favorite thing to use because, well just look at my name.

I once played a Selesnya tokens deck that had a Soul Sisters theme built into it. I kept blinking Avenger of Zendikar and amassed some 30+ Plant tokens all with various P/T as lands entered. I ended up around 190 life as well. Literally everybody threw everything they had at me and I just took it all to the face. I was having just an absolute blast.

I got knocked all the way down to like 30 life, and just two turns later I was back up at 140.

Seriously, I've said it before but I truly do mean this:

Seriously, have you ever seen someone generate over 2,000,000 life? I have, because it was me.

Lest Not Be Forgotten

If a creature you control with converted mana cost 3 or greater died this turn and wasn't sacrificed, draw a card.

Fateful Hour - If you have 5 or less life, draw two cards instead.

Mausoleums built in memory of our bravest soldiers are a careful reminder as to why we keep this fight - To ensure eventual peace for all.

Make both halves of a legendary creature with Meld.

Nissa, Who Shakes What Zendikar Gave Her

Kiora's Eternity - Dual Infinity, and Beyond!!