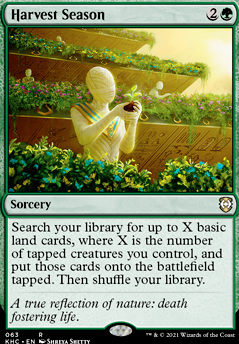 Search your library for up to X basic land cards, where X is the number of tapped creatures you control, and put those cards onto the battlefield tapped. Then shuffle your library. 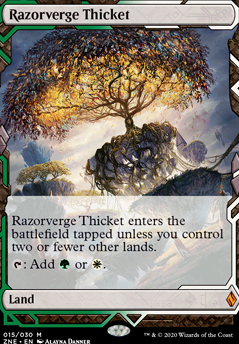 Awesome deck my man! I absolutely love Hapatra and think she is really fun! Feel free to check out my own build and see if there is anything in there you like: Hapatra, Vizier of Plagues

But may I suggest: Hard to block Hapatra - Trailblazer's Boots, Sword of Truth and Justice, Sleeper's Guile, Cover of Darkness (also can be used to hit with alot of snakes)

Tokens helping - Bastion of Remembrance, The Meathook Massacre, Gruesome Fate, Throne of the God-Pharaoh, Harvest Season, Altar of the Brood

Keep it up man! Really fun to play :)

Oooo, thank you for the suggestions seshiro_of_the_orochi! I know I definitely have a copy of Harvest Season around in my binders. I had Harvest Season in one of the iterations of the Adrix and Nev, Twincasters deck that this list originally was.

This looks very good, great job. Harvest Season seems to be a good adition. You want to attack a lot, so it will propably ramp you quite a bit.

Everybody wants to be a Squirrel

Hi friend, just a quick note to say that Spring / Mind is not legal in this deck. Your commander's colour identity is Green/Black, and Mind requires Blue. You may want to consider Harvest Season in its place. The land/rock count also seems a bit low.