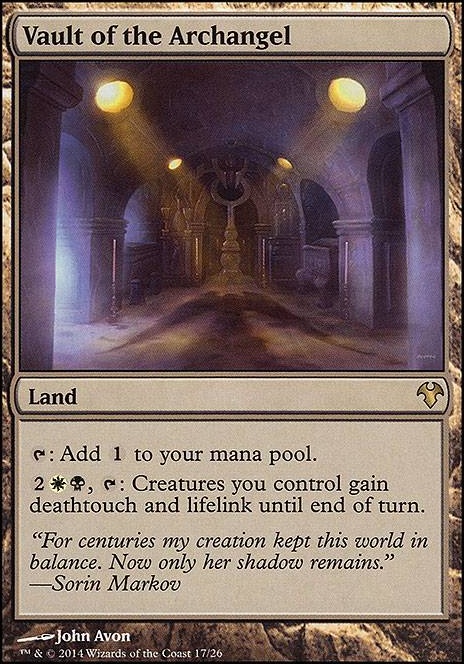 , : Creatures you control gain deathtouch and lifelink until end of turn.

Paying With 'Your' Life (Selenia)
by JANKYARD_DOG 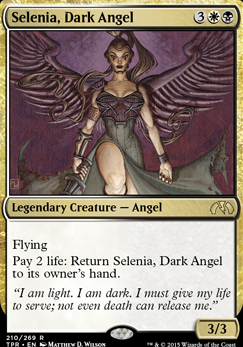 Vault of the Archangel Discussion

carpecanum Those are some great suggestions. Iâm definitely going to put Vault of the Archangel and Palace Siege in there, and the the others are also very interesting. Thank you kindly good sir

Erebos, God of the Dead is a solid recommendation especially now that I've removed Tainted Remedy.

Bloodchief Ascension would be a good consideration if I had ways to force discard and a lot of destroy effects. As it is the only ones I have are No Mercy and Vault of the Archangel.

I'd put in Oath of Kaya if I had more than just the one Planeswalker.

Out: Merciless Eviction
In: Kindred Dominance
Even though this board wipe will cost one more mana, it will be worth it, since it's going to be totally one sided for the most part. I'll also add more single target removal for other permanents, to make up for this change. I decided on this swap, since I tend to not use Merciless Eviction, because it will wipe my board and exile my great vampire lords aswell.

Out: Sorin, Imperious Bloodlord
In: Nighthawk Scavenger
This plainswalker didn't do much in the last games for me. Most of my vampires are so cheap, that his ult didn't help me mana wise at all. His other effects are nice, but not particular amazing. The newly printed Nighthawk Scavenger on the other hand is going to be a real powerhouse. It's a better version of Vampire Nighthawk, 90% of the time and I really like both of them.

Out: Vito, Thorn of the Dusk Rose
In: Eldrazi Monument
Vito didn't help this deck much at all. I think he is a trap. I also noticed, that I don't run Exquisite Blood anyway, so this combo isn't an option currently, either. This deck's biggest problem are boardwipes, so I think Eldrazi Monument will be a great addition in order to protect my army of bloodsuckers.

Out: Fellwar Stone
In: Idol of Oblivion
Ramp isn't as big of a problem. Even though we are in Mardu, most of the cards are low costed. So I can efford to take out one piece of ramp. Card Draw on the other hand is often a problem. Therefore, I'll test Idol of Oblivion, since it only costs 2 mana and can draw you one additional card each turn, most of the time.

Out: Slayers' Stronghold
In: Myriad Landscape
I noticed that I might cut some utility lands aswell, because sometimes I only draw those and I'm stuck with colorless mana. Since I prefer Vault of the Archangel's effect over Slayers' Stronghold, I'll cut the later one. Myriad Landscape can function as ramp and help me to get more basics out of my deck, which can be nice if I'm in topdeck mode.

Out: Sorin, Vengeful Bloodlord
In: Nullpriest of Oblivion
Another plaineswalker I'm going to cut, since it doesn't help me with my gameplan, most of the time. The only thing I use is his ult, to recure one vampire at best. Nullpriest of Oblivion can do the same, but is a vampire on it's own and can also come down way earlier if we need damage or more tokens.

Out: Battlefield Forge & Swamp
In: Spectator Seating & Vault of Champions
Not much to say, changing two lands for probably better ones who came in recent months.

Last two, I promise: Kessig Wolf Run and Vault of the Archangel for aggro deck strategies.