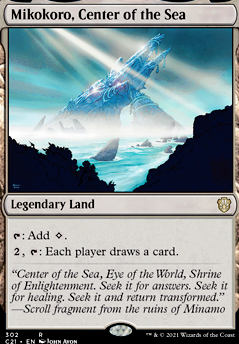 Mikokoro, Center of the Sea

Mikokoro, Center of the Sea Discussion

So Wheel and Deal immediately comes to mind as do the "Wheel of ___" cards, though I dunno what your budget for this deck is and some cost quite the pretty penny, with Mikokoro, Center of the Sea, Otherworld Atlas, and Walking Archive as other universal draw options. There's Heartbeat of Spring, Mana Flare, Keeper of Progenitus for more mana doublers as well as Eladamri's Vineyard, Magus of the Vineyard, Shizuko, Caller of Autumn, and to a lesser extent Blinkmoth Urn for similar mana gifts with Fertilid not being too far off from that. Finally there's Charmed Griffin and Hunted Wumpus for more free stuff options, though admittedly more restricted than what you already have.

Mikokoro, Center of the Sea to enable more looting?

How is it supposed to be a group hug, if the only politics card is your commander, Braids? I were expecting to see Show and Tell or something like that, at least. Not even your lands will hug your opponents, no Forbidden Orchard or Mikokoro, Center of the Sea. It's not a hug deck, 'cause you try to kick your opponents, but they're gonna do it faster very often.