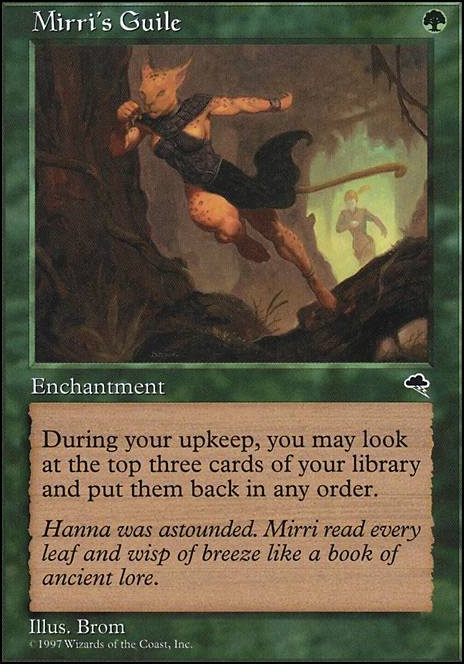 At the beginning of your upkeep, you may look at the top three cards of your library, then put them back in any order.

Nathy poo - Dobby is a free elf 2.0
by SilentBladeOni

Mayael, The Animal
by Mayo000

No problem! Sorry that I didn't quite understand the deck's theme.

My suggestion would be to cut two of either Bloom Tender , Lotus Petal , or Emerald Medallion for 2 lands. Petal is a nice mana burst, but kind of only powerful if you are attempting to routinely loop or combo with it. Emerald Medallion is a really strong card, but I don't think it's being maximized within this deck. You aren't ramping into huge green spells (or even moderately costed green spells) on a consistent basis. It is great if you are storming off with pump spells, but half of your green pump spells only cost a single so the cost reduction doesn't impact them. Bloom Tender is another very strong ramp spell, but again, I don't think it is being maximized here. You don't run a terribly large number of multi-colored permanents. Sure with Rafiq on the battlefield it's 3 mana, but without him it's likely only producing green mana as most of your non-buffing permanents are green (I guess you could place a non-green buff on one of your mana dorks, but that seems like a waste).

With the amount of top deck manipulation that you are running, those two cantrips are great additions. You could also consider Ponder and the weaker Portent . They both draw and allow you to shuffle your library. Treasure Cruise and Dig Through Time are also fantastic since you can routinely cast them for and with Delve.

P.S. I actually think Mirri's Guile is quite strong and good in this deck, it was just the first one that I thought of when writing my earlier comment.

Thank you Hi_diddly_ho_neighbor! I think you're right I do need to add one or two lands, though I'm not exactly sure what to cut- possibly a ramp spell? Your second point's also really true, I suppose Mirri's Guile and Soothsaying would be good cuts and maybe anything else I can find since card draw would actually help me get what I need- though on your point about more long term pump spells I'd have to disagree; equipment and enchantments are certainly effective but not really the decks theme, and believe it or not adding 1-2 pump spells that are temporary can actually kill people on the spot just like berserk, as well only need +7/+7 to pump him so that he can perform a 1-hit K/O. But I think you're right, the deck could indeed use a bit more card draw as that could help me get everything else! Any suggestions for what card draw? I was thinking Preordain or Serum Visions , as I'm not sure what other spells that are relatively cheaper in mana could work. Anyways though, thank you very much! Cheers!

some suggestions based on your comments in the commander help page:

1) Add more lands: If you aren't hitting land drops, simply running more lands will fix this. 31 is very low, even for such a low mana curve. I'd up the number to 34-35.

2) Issues with lack of interaction, can't get the pump spells or unblockable spells that you need: I think this issue could be resolved by cutting most of your pump and unblockable spells and replacing them with more card draw (you only run 5 actual card advantage spells) and interaction. Card draw allows you to draw into your pump spells, which means you can run fewer of those and play more interaction/ramp/lands etc. Card selection (i.e. scrying, Mirri's Guile , and other top-deck manipulation effects) and tutors are great and all, but you aren't actually drawing the cards and gaining resource advantage.

3) Running better pump spells: I'd suggest cutting most of your narrow pump/unblockable spells in favor of more flexible options. For example, the Sword of X/Y cycle. They make Rafiq bigger, give him protection (unblockable) and provide extra effects. In my experience, if you are running a single use pump spells in commander then you want it to have a big effect. Berserk , which you run, is a good example of such a spell. It is single use, but it is also can outright remove someone from the game. Outside of those big effects, you want your pump spells to provide more consistent buffs or additional value. I find equipment to do this quite well since they often give additional boons like trample and stay around if Rafiq dies, but auras also can do this if that is more your cup-of-tea. And, if you move to a more equipment or aura focus, you can tailor your card advantage choices to feed off that strategy (i.e. equipment and Puresteel Paladin or auras and Enchantress's Presence , or both and Sram, Senior Edificer ).

100% agree with what @abierto said concerning Necropotence . Getting in a five colour deck is an ask, especially compared to the all stars that are Mirri's Guile and Sylvan Library .

Dont get me wrong though, Necropotence is an amazing card, in most decks, just think there is better fits when you are running all the colours.

Also, abierto, is that discord open to other Sliver players? You can always check out my deck if I need to meet certain... requirements lol

Mortlocke hope youâre doing well. I put together an unrelated Orzhov deck and have been amazed at the work Necropotence puts in. Iâm never sorry to draw it and being able to restock my hand at the end of every turn is absolutely worth giving up the draw and a life per card. It stacks well with Sensei's Divining Top and Mirri's Guile . For me, it would take the place of Sylvan Library

Your wide array of suggestions will come to use. I believe Guile and Rector have potential to do some work, especially Mirri's Guile .

With sterling grove, Starfield of Nyx might be fun if you want to shoot for the recurring card search combo. If so, having Defense of the Heart might also be worthwhile. Mirri's Guile could help make sure you get the cards you want. There is also Overwhelming Splendor for the lockdown side of things, though maybe a bit of an expensive cmc for cEDH. Academy Rector could help get it out (among other cards)!