Colourless creatures you control get +2/+2.

Whenever you tap a permanent for , gain an additional .

Whenever you cast a colourless spell, you gain 2 life. 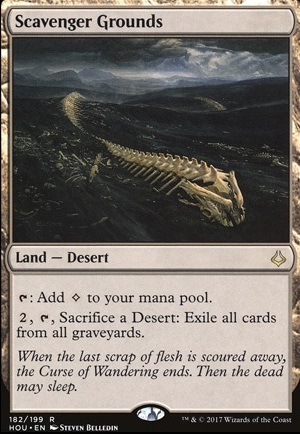 Have you thought about the card Forsaken Monument ? It can help with beat down and makes infinite mana with Basalt Monolith .

Sorin_Markov_1947 thanks for the suggestions! I did consider the sentinels at one point but I found that with Stonecoil it's not that difficult to deal with opposing fliers and my other creatures just work too well in the deck to be able to cut for it anyway, I couldn't find a niche in practice where I wished I had a sentinel over whatever else I happened to draw outside of games where I flooded. Generally a stonecoil on turn 3 or 4 can block as much as needed to let the deck scale up to find other answers, and if my opponent isn't intent on playing the board early a crystalline giant tends to take care of our needs.

The main idea of the deck is to play through Forsaken Monument to aim for either Ugin or straight card advantage, we set up a factory with Lithoform Engine and look to do things like tap 5 lands to cast Chrome Replicator and copy it with lithoform to get 4 6/6 creatures, or stack up a Crawling Barrens to a 30/30 or so, or cast and copy a Stonecoil Serpent at x=16 for a pair of 18/18 tramplers. Everything else is pretty much card advantage and protection.

To this end I do agree that 4 Ugins and Mazeminds would be a great move, and since this list hasn't been upgraded since the days of Tergrid meta I'd be happy to cut Weathered Runestone to complete those playsets and add something like a Shadowspear in the spare slot. The other thing I noticed I didn't include in this build was Skyclave Relic , my other ramp piece in case I don't find my Palladium Myr and the reason that Throne of Makindi gets a spot on the mana base. I think from the list above I'd probably just take out all 3 runestones and 1 copy of Cosmos Elixir to add a 4th each of Ugin and Mazemind as well as 2 Relics.

AShadyZebra It depends on what you're trying to do (card draw?), but I would probably pick Conjurer's Bauble , because both of it's effects seem useful and you don't have to pay/ sac to draw a card. With Chromatic Star I don't see the filter effect ever being useful and in order to draw a card you would need a sac outlet. I really like Lithoform Engine and Forsaken Monument , but the thing that steers me away from both is the fact that they're legendary, which is somewhat of a nonbo with Osgir. They're both really good cards with powerful effects, but for what I would use them for in my own deck, I feel like there are better more cost efficient alternatives.

You do make a good point about Cursed Mirror though, I may have to take another look at that one.

Suns_Champion I actually didn't realize Zirda, the Dawnwaker could reduce equip costs, and hadn't really thought about her reducing any other abilities other than Osgir's, so thank you for pointing that out. Even though Platinum Angel / Platinum Emperion are a ton of fun to play in the deck, I would probably have to agree they're pretty cheeky.

Thank you both for the continued discussion and suggestions. Much appreciated.

I'm making a similar version of this deck on a budget. Between Chromatic Star and Conjurer's Bauble , which do you like more? Since Star's draw effect isn't attached to its ability, you can actually sacrifice it to other things and still get your card. The Bauble is more flexible because it doesn't require free mana to activate and it actually provides some limited utility. Other cards I'm interested in are are Lithoform Engine and Forsaken Monument . Thoughts?

Beyond that, I agree that Zirda, the Dawnwaker seems like a superb card in this deck. Beyond synergizing very well with a large number of cards, it also serves as an alternative trigger for your infinite mana combo with Basalt Monolith . To find space, I would consider removing Umbral Mantle , Staff of Domination , and Walking Ballista . Aside from cases where you have infinite mana, these cards seem distinctly bad to me.

On a final note, I am honestly a huge fan of Cursed Mirror . It's mediocre if you play it as mana rock, but it's absolutely brutal if you use Osgir to recur it and copy your opponent's beatstick commander several times over. I've won several games using that strategy.

Hey there! Ramping can be quite difficult in colorless, and while you have some wonderful ramp rocks, I'd recommend a few others as well! I'd recommend cutting a few eldrazi or things you can spare, since there's no use in filling your hand with huge spells if you can't cast them!

The next few may OR may not be out of your budget, so here they are if you haven't heard of them:

Hope this helps! Be sure to check out some of my decks, and drop an upvote if you'd like! Good luck on the deck- cheers!

Edit: some cuts I recommend are 2 of the all is dusts, both karns (they're fun, but not worth it), and possibly 2 of the thought-knot seers as long as you'd be adding some of the blockers mentioned above.

If you want this to be competitive, you should probably change a few things.

If you want to have the sideboard artifact toolbox route, I'd go up to a playset of Karns. To make space I would probably cut the Conduit of Ruin s, its a very fun card for casual magic but I just don't think it does enough here besides ramp more.

I disagree with those above, Warping Wail is a very versatile card and hits a lot of creatures. I'd cut 1-2 contortions and add a few Dismember s and wails back.

I'm not sure how good Forsaken Monument is, but its legendary and not as important as Karn which means 4x is definitely overboard.

Mystic Forge is much better in an artifact-storm kind of deck that wants to flood the board with artifacts as fast as possible, I would cut this one altogether.

I would like to point out that Forsaken Monument combos with Basalt Monolith as well. Taps Basalt for 4, untaps for 3, repeat.