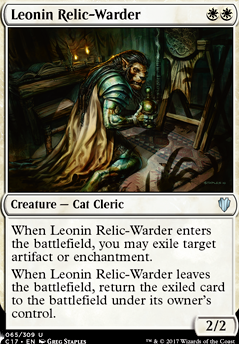 When Leonin Relic-Warder enters the battlefield, you may exile target artifact or enchantment.

Leonin Relic-Warder occurrence in decks from the last year

Rin and Seri
by TOSebamo

Three, three for a three and a three
by RoyaleWithCheese

Cult of Orah EDH
by Dracknid10

But I thought you died?
by geereg

Nevi and the sacs

Seen your message on discord if your aiming to make the deck faster id probably look at some missing staples Mox Diamond , Your artifact count isnt there for opal unfortunately ive found Jeweled Amulet to be great at accelerating early action aswell also our rituals in black Dark Ritual Cabal Ritual etc. I assume lantern is to combat moons? Otherwise feels like it could slow you down id say black market is probably too slow aswell too much investment and upkeep to make it good for an early push try Carnival of Souls i found it fantastic in aristocrat style decks your pingers generally negate the damage when ur going off and it really helps smooth out things during the combo turn mana wise. We could run cat combo aswell with Leonin Relic-Warder and any of the 3 enchantment reanimate spells.( Dance of the Dead , Animate Dead Necromancy ). This makes a loop where u can infinitely sac cat for value. Great game the other night! Hope to see nev again soon!

Hey, a challenge I accept :) Here's what I have so far, Too Much Disk.

My idea is Esper Control/Reanimator to abuse the repeatable Disk effect with Nevinyrral. To take advantage of Sun Titan + Apprentice Necromancer interaction to repeatedly reanimate Recruiter of the Guard and Heliod's Pilgrim who can tutor all the combo pieces I need. Animate Cat combo is the true win condition I'm playing: Animate Dead + Blood Artist + Leonin Relic-Warder. Since my version is $200 budget my choices for expensive price cards other than lands are Recruiter of the Guard and Liliana, Dreadhorde General.

What are your thoughts on Nevinyrral? How would you make a deck with him?

Hey, just popped in from reddit. So I'm not gonna lie, I spent alot of time writing out a really thoughtful response and my internet timed out and erased it all. So this may just he the cliffsnotes lol. Overall, you have a great list for lifegain and it's good to see the staples that should be there like Sanguine Bond, Exquisite Blood, and Exsanguinate. I could never find a way to generate the mana and tutor these guys out to the battlefield save a couple times where I was lucky, so that may be something I might look into because it really is a powerful game ending combo. I also appreciate you not using Oloro as commander for lifegain and got to see some cards I've never heard of or even thought to include in your list, specifically Angelic Chorus and Proper Burial. Which brings me to my suggestions, I tried to stay away from uber expensive cards that cEDH decks might require and still lend some quality assistance. Luminarch Ascension is a 2 CMC drop card that generates tokens in the form of 4/4 flyers and it works better with the more opponents you have as it collects its quest counters quicker. I always think lifegain needs the defense where it can get it so it can build a base to keep generating more life and set itself up and this card works great. Not to mention it works well with Proper Burial and Angelic Chorus. Speaking of ETBs, why wait for your creatures when you can use your opponents for lifegain with Authority of the Consuls. Now say someone counters your Sanguine Bond or whatever other combo you may have needed, Elixir of Immortality is a cheap low CMC artifact that gives you 5 life and recurs your graveyard back into your deck. Panharmonicon doubles your effects I believe as well but I need to double check that and just thought of it. Lastly, my most expensive recommendation at like 12 dollars, is Archangel of Thune. She is 5 CMC and can become a monster real quick in your deck if she isnt dealt with. At this point I put in a whole thing about mana rocks. They effectively speed up your turn by increasing your mana base, so you can do turn 5 things on turn 4. The signet is nice and sol ring is auto include, but talismans are strictly better than signers in my book and only a couple bucks. For your colors, Talisman of Hierarchy is best but you can use any of the ones with white or black in them, they just wont be as good as hierarchy. Finally, I wouldnt be doing you any justice if I didnt add some game breaking cheese from my current list. Say you have either Angelic Chorus or Proper Burial on the field. With a card like Entomb or Buried Alive or any discard cards could work but not as ideal, bury Leonin Relic-Warder from your deck. Then resurrect him with Dance of the Dead, Necromancy, or Animate Dead, use Leonin's ETB effect to exile the card which revived him, thus burying/sacrificing him, thus bringing the revive card back from exile so that you can bring Leonin back from the dead, this loops for an infinity thus triggering proper burial and/or angelic chorus and giving you infinite life. Anyways those are my suggestions, I hope they help, best of luck, and have fun playing!