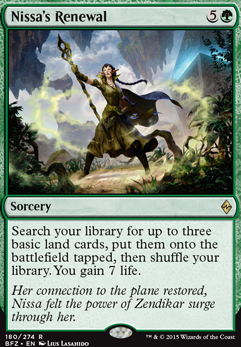 Search your library for up to three basic land cards, put them onto the battlefield tapped, then shuffle your library. You gain 7 life.

Nissa's Renewal occurrence in decks from the last year

Another tip for possible cuts, I usually recommend 36 lands. So because of that you can cut a swamp or forest to maybe squeeze in a <1 dollar card. Also bolas citadel isn't really the best card in the world unless you are building a combo deck and this deck seems more beat/stax then combo. So that should also help with budget and help ya squeeze another <1 dollar card. Also instead of harrow, consider Circuitous Route (1 dollar), Rampant Growth (40 cents), Search for Tomorrow (30 cents), Nissa's Renewal (50 cents), Khalni Heart Expedition (34 cents), and Explore (25 cents). I run all of these in my vaevictis deck( Jund Ramp/Jund stax). Very good ramp spells and a lot more better suited for this deck than harrow. Harrow is a lot better in a lands matter type deck. I really shill explore because you can draw and play an extra land, but if ya want a land tutor I would go circuitous route and/or khalni heart expedition cause they can tutor two basic lands.

Howl of the night pack Deck

Since all your land search effects put at least one land into your hand, use Skyshroud Ranger , Sakura-Tribe Scout or Walking Atlas instead of Llanowar Elves .

Boundless Realms or Nissa's Renewal could be pretty good as the final search spell.

You might consider Key to the City as a way to throw away dead sorcery spells to find more action. And if you can make unblockable creatures, Primal Bellow , Timbermaw Larva and Blanchwood Armor would close out a game quickly.

This would take some of the focus away from wolves, and more on to the "number of forests" part of Howl of the Night Pack . I'm not sure that's any better.

The easiest way to speed up a deck is by removing ETB tapped lands. I highly suggest running Command Tower , as well as City of Brass and Mana Confluence . If you have access to it, Cavern of Souls is a good option for any tribal deck, but Unclaimed Territory is another good option. Forbidden Orchard , Exotic Orchard and Reflecting Pool are more interesting lands to consider.

Green dorks and two-mana rocks are also very good. I see you're running Birds of Paradise , but Elves of Deep Shadow , Llanowar Elves , Rampant Growth , Fyndhorn Elves , Orcish Lumberjack and (if you can) Noble Hierarch are also great additions. If you want to invest relatively heavily into your dork-base, Bloom Tender is REALLY good in chromatic decks. If you find yourself facing a lot of blue decks, Carpet of Flowers is a good idea, too; Joiner Adept acts as a second Chromatic Lantern .

Fellwar Stone is good. The talisman cycles ( Talisman of Dominance , Talisman of Indulgence , Talisman of Impulse , Talisman of Unity , Talisman of Progress and the new five from Modern Horizons) are all good; I suggest that most, if not all, of your mana rocks should be two or less mana. Using a land like Ancient Tomb also helps cast these turn one. Signets like Dimir Signet or Boros Signet are good too, although I think most of the time the talismans will be better. Gilded Lotus is a good exception to my CMC rule in a deck with as many fat creatures as yours.

I don't think Nissa's Renewal is very good; generally, ramp is good in the early game, but not so good by the time you reach six mana. Nature's Lore , Rampant Growth , Farseek , Cultivate and/or Kodama's Reach are all powerful ramp spells you can fire off early. I think the first three are better, if only because they can fetch non-basics like Breeding Pool or Godless Shrine . I'm not as much a fan of the other two, but experience will show if they're worth including. Finally, I think Skyshroud Claim is better than Explosive Vegetation .

If you're going in the Quicksilver Amulet direction, Elvish Piper and Thran Temporal Gateway are good ideas as well.

If at all possible, tutors are good. Demonic Tutor is the gold standard here, but Diabolic Tutor is a good, more affordable alternative. Vampiric Tutor , Worldly Tutor , Sylvan Tutor , Dark Petition and Gamble are all good cards as well, though their affordability varies tremendously.

Red comes with good counter counter magic options. Price of Glory is a good card if you want to discourage opponents playing on your turn, and Pyroblast is a good way to stop Counterspell and friends. Cards like Pyrostatic Pillar can punish decks with lower curves.

Card draw is at a premium in EDH. Staff of Nin is easy on the colored mana and gives you an extra draw each turn, and Phyrexian Arena is another good option. Harmonize , Concentrate and Painful Truths are good draw-threes.

Because your deck is running a LOT of fatties (and the best fatties, at that, 'cause they're dragons), you may find cards like Lurking Predators is be pretty good; Descendants' Path is a similar card. Depending on how fatty-heavy your meta is, Eureka effects like Show and Tell may be good. Sneak Attack is good if you want to use one-time face-smacks like Nicol Bolas or your already included Oros, the Avenger .

If you DON'T want to run dorks, and opt for artifact ramp instead, depending on your meta you may have a good time with cards like Porphyry Nodes or Night of Souls' Betrayal . Effects like Pyroclasm and Volcanic Fallout can also wipe out opponent's boards if they choose to go wide.

I think EDH decks tend to need a lot of mass removal. By Force is a favorite of mine, and Toxic Deluge , Wrath of God , Ritual of Soot and Supreme Verdict are all great if you have access to them. Back to Nature is good if you choose to cut down on the number of enchantments you're running, but Nature's Claim or Krosan Grip are also pretty good options.

If your curve is really high, things like Timesifter can be pretty brutal.

I'm not super sure Niv-Mizzet Reborn is very good. I don't know if you'll be getting very much card advantage, because you have a lot of cards that are more or less than exactly two colors. I think a card-draw spell like the ones I mentioned above would be better, like Treasure Cruise or Dig Through Time .

Forgive me I'm not sure how to edit my posts but you could also add some ramp I used in a deck that dropped lands on the battlefield. Those included: Nissa's Pilgrimage , Explosive Vegetation , and Nissa's Renewal