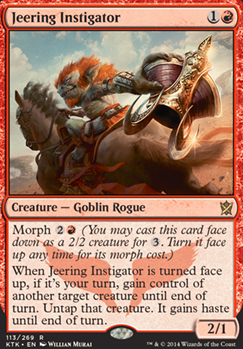 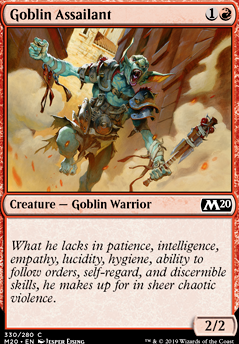 I have a Mazirek, Kraul Death Priest deck that might be a good place to look. Where did everyone go?

It's important to remember that Rogue's Passage can target any creature available on the board, not just your general, which lets you play politics with other aggro decks(making a general unblockable when they swing at your opponent and they forgot you had it is great for making the board smaller), and it's both repeatable and useful for other creatures that aren't animar when he gets hated out.(not to mention unlike the protection chances, you can use it again and again, in case animar isn't currently big enough for one-shots).

I don't know your meta, but you could always use Jeering Instigator to steal utility creatures rather than just to swing('Hey thanks for the Arcanis the Omnipotent draws for the turn, or stalling out a Blood Artist combo or just taking someone's Butcher of Malakir's to ruin someone's fun).

Sorry for the double post, but to back up what I was saying about cutting black, it seems to be your most lackluster color. Kraum is a better just "I want more colors" partner, as he draws cards. You could replace Phage with the obviously much worse-but-along-the-same-lines Leveler, which is great with Fractured Identity and could have a place anyway, Vampiric Tutor becomes Long-Term Plans, again, worse, but still good. No Ghastly Conscription-esque replacements I can think of currently.

On the other side of things, red gives you Animar, Soul of Elements, AKA Animorphs, for all the free morphs. It gives you Kraum, probably better than Silas for the most part. Akroma, Angel of Fury is a big red morph-er, Dwarven Blastminer is on-theme land hate, and Skirk Alarmist, Ixidors worse cousin. I've seen animorphs lists run Jeering Instigator as well.

If you don't go for the switch, why no Bane of the Living? On theme wrath. You should also consider Strionic Resonator to copy some of the un-morph triggers.

These cards will all cost less than $30 with shipping on TCGplayer (all NM and LP). My total was $29.73. I think they should all make their way into the deck (suggested changes):