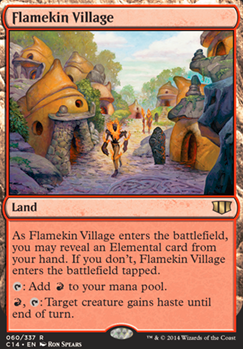 Waking the Demon
by Switchfox 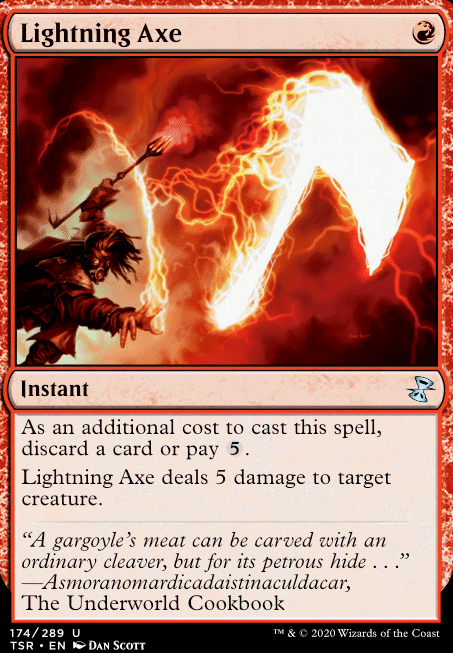 any consideration for effects like Flamekin Village or Hall of the Bandit Lord?

Hey nathanielhebert thanks for the suggestion but Flamekin Village it's over budget and isn't legal in modern. I'm glad you liked the deck ^^

I know you're working within budgetary constraints, but I just added Flamekin Village to my elemental build, for a bit more haste. Not sure if it's Modern legal however.

I love Feldon! He's my favorite commander. Having played him a lot, I've got some suggestions.

Haste is so strong. Especially in mono-red. There are 2 cards you can run that give you haste and don't even take up deck space. They're lands: Hanweir Battlements Â Flip and Flamekin Village . They're pretty handy when you're commander gets recognized as a threat and killed off. Or if you have something in your hand you'd like to give haste to. After all, you can threaten opponents to not kill it because then you'll just reanimate it in multiples. I love that trick.

Ramp. I cannot stress this enough. Your deck is based off of Feldon, and reusing him as much as possible. That takes a ton of mana. And if Feldon gets hated off the board, the cards in your hand also cost a lot of mana to cast. The best thing for both situations is a TON of ramp. I see you already have Extraplanar Lens which is great alongside Goblin Engineer . Let me suggest a new favorite ramp card of mine that goes by the name of Fires of Invention . It lets you cast Feldon for free (or only for the commander tax) alongside other cards while keeping mana open to activate Feldon! It's great.

Boardwipes. You're a reanimator deck. Feldon is pretty cheap to cast, and he likes dead stuff, so boardwipes fit in naturally. All Is Dust and Blasphemous Act are the best of the bunch.

There are some haymakers I use that are my favorites. I love Duplicant since the exile is often very relevant. Pathrazer of Ulamog is the best card for taking a player down a peg or 6. If you don't run into decks that run much interaction, you can try using Worldgorger Dragon . It'll dodge any boardwipe for the turn. And if you have Thousand-Year Elixir or some other haste enabler out, it'll let you use Feldon's abilities multiple times throughout a turn cycle. Chancellor of the Forge is like my own personal, reusable Krenko. I've gotta mention Fiery Emancipation . This card alone can result in easy one-hit kills.

I've got my own deck you can check out at FELDON EDH PRIMER: FELDON NEEDS SOME LOVE