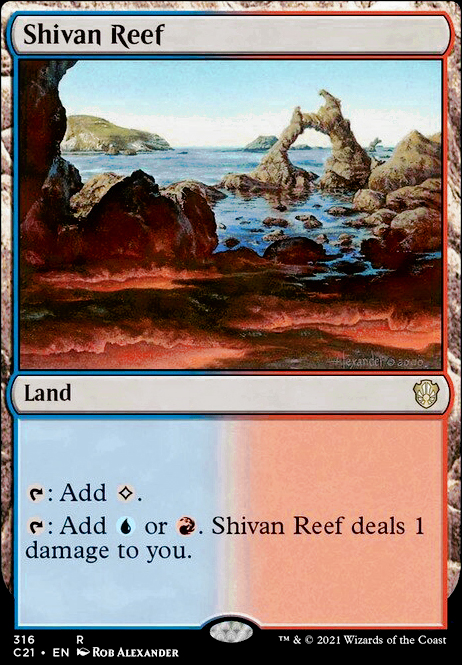 The Sliver Overlord rocks!!!
by DeadManJohn1

I actually think those are great ideas. While I might not add those specific two lands you mentioned, you made me remember Izzet Boilerworks and Dimir Aqueduct which allow me to reuse the scry from the temple, the exile from Bojuka Bog, get more energy from Aether Hub and both should be a bit cheaper than Shivan Reef.

I probably won't be pivoting to but I'll make sure to include a specific section in this primer about a sultai variant. Ayula's Influence isn't as fast as Infestaion, nor as splasable, but has some other neat jank tech.

It probably didn't function very well because this deck has never been anything other than a meme. Though the Seismic Swans version actually has a few top8s.

wallisface on Help with land distribution

Your best bets for under $10 will be Sulfur Falls , Shivan Reef , and Cascade Bluffs

So, you may want to define your budget in just going to assume no card over 5 dollars seeing as the most expensive card in here is 7 bucks.

As for the rest of the distribution on basics - once you figure out the none basics you're running determine the remaining number of slots you have. Currently your red pips are about 75%. So, if you were to just run basics you'd run 18 mountains and 6 islands; this is just based on the % that red is in your deck. Of course running dual lands is better but you can just use that as a base.