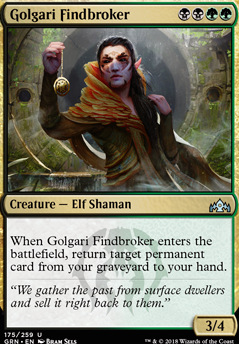 When Golgari Findbroker enters the battlefield, return target permanent card from your graveyard to your hand.

Golgari Findbroker occurrence in decks from the last year 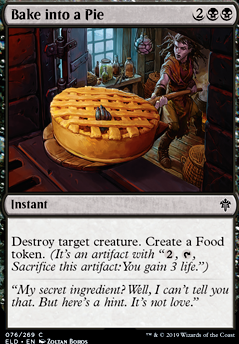 Pharika - Dump and Pump
by Achuta

Check out my homebrew Yarok Deck and let me know what you think. Yarok ETBâs My play group is definitely a more competitive group. This is my most recent build and does very well. Itâs main goal is to go infinite mana and dump into a win game like urza or tooth and nail. Can win on turn 3 but hits 4 pretty often especially if not messed with, but it has enough interactions to last mid to late game and can win on the flip of a dime. Yarok is sooooo fun! Super value.

+1 Life from the Loam this is also good for flipping your deck over, land destruction, but its better with fetches

+1 Bane of Progress creeping corrosion but on steroids

-1 Teneb, the Harvester pretty slow card imo but I kinda like it so idk

-1 Gods Willing you don't really care about your creatures dying

Glowspore Shaman is good for selfmill and can grab a land.

Golgari Findbroker can help get an artifact, enchantment or land out of the graveyard.

Deadbridge Chant is nice in recursion decks but can be a bit too random for some people.

Mana rocks like Golgari Signet , Golgari Locket , Golgari Cluestone , Mana Geode are always important to help cast bigger spells early. and if you can put in a Sol Ring