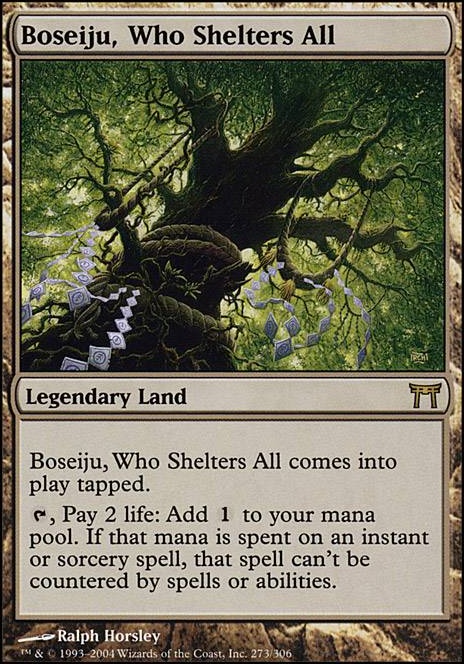 Boseiju, Who Shelters All enters the battlefield tapped.

, Pay 2 life: Add to your mana pool. If that mana is spent on an instant or sorcery spell, that spell can't be countered by spells or abilities.

Boseiju, Who Shelters All Discussion

I've been trying to figure out a version of this where you play around Blood Funnel - you lock out a lot of lists entirely. Its also neat in that it speeds you up - if you can meet sacrifice requirements. Funnel -> Harmless turn three is really good, while 'can't be countered' effects bypass it completely - Vexing Shusher/Boseiju, Who Shelters All gets its spots mainboard.

Pay more and deal with entire game-winning stacks of spells and abilities, and you get Summary Dismissal , which can counter the Storm trigger, something Disallow can't do.

On top of that, it exiles the spells instead of just countering them, working even through a Boseiju, Who Shelters All -like can't-be-countered effect. If we go by power, it's hard to beat that.

Any reason why dockside and jeska's are in your maybeboard, price?

Boseiju, Who Shelters All - Anti blue

Profet93 Thanks for commenting! I've sort of given this deck a bit of a rest for cedh due to the amount of ad naus / thoracle decks in the meta currently, with the other half of the meta being graveyard hate and stax, sadly this deck does seem to die pretty hard once Bolas's Citadel gets exiled, and its rather hard to come back even after it just gets destroyed. Scheming symmetry is rather solid for opposition agent, which we can tutor with Varragoth, most games I'll have Varragoth out t1 and tutoring t2, so if I have a it in hand, I'll use it in that scenario, again though, very easy to see, and stop. I think I'll pass on the crucible, because I personally think it'd feel bad in more cases than not to spend 3 mana on it. Leyline is something I'm definitely pondering on, with the addition of Dauthi Voidwalker we achieve the same effect, but slightly better and its more mana efficient. but the void is still a good though, as I'll probably be making some touches to this deck to attempt to shift it into a grindier deck, because it's simply a bit rough for Varragoth to outspeed most decks in the meta right now, but I think he'll be a solid grindy deck.

I honestly can't believe I forgot about Boseiju, Who Shelters All it will definitely be going in the deck, as for Infernal Darkness that one extra mana and the cumulative upkeep makes it a bit rough for me to want to add, but I'll experiment with it to make sure I'm not missing an opportunity.

Again, thank you so much for comment, I really like the suggestions and I'll be implementing them asap, if you like the deck, an upvote would mean a lot, thank you! :)