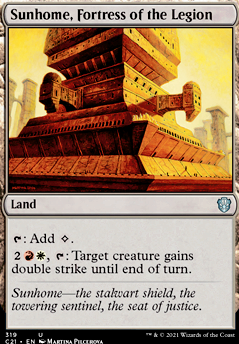 Sunhome, Fortress of the Legion

Night at the Museum!
by whats_your_life_total

Above, Below & Beyond
by TheFlameReaper

Sunhome, Fortress of the Legion Discussion

Whispersilk Cloak, Rogue's Passage, and Sunhome, Fortress of the Legion might make life easier for Jared.

Hey there! Below are some suggestions for improving your land/mana base! Some suggestions may or may not be within your budget, so feel free to ignore the ones that you think don't personally fit you despite my thoughts! Needleverge Pathway Â Flip, Temple of Triumph, Sacred Foundry, Inspiring Vantage, Battlefield Forge, Sunhome, Fortress of the Legion, Sunbaked Canyon, Arid Mesa, Rugged Prairie, Spectator Seating, Scabland, Strip Mine, Wasteland, Command Tower, Slayers' Stronghold, Inventors' Fair, and Ancient Tomb are all great things you may want to consider! As for ramp, you may like some of the following: Arcane Signet, Sol Ring, Boros Signet, Land Tax, Gift of Estates, Brass Squire, Dockside Extortionist, Treasonous Ogre, Simian Spirit Guide, Seething Song, Ruby Medallion, Pearl Medallion, Cloud Key, Mind Stone, Lotus Petal, and Geosurge! Ramp is a very important part of commander, and in your deck getting equipment out fast as well as playing Ardenn fast seems to be important- and ramp can help you do just that! While you obviously shouldn't use all of them, there are definitely a few in there you should put in FOR SURE. Now that said, I hope this helps, good luck on your deck, and have a wonderful day- happy tapping! :)