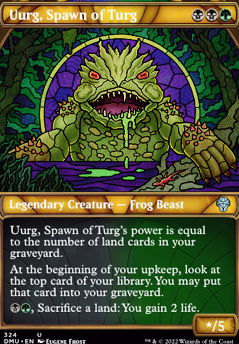 Wow, this sparks some fond memories for me!

I first started playing almost 25 years ago. I started during about a month before Exodus dropped. The "Rath Cycle" is my sentimental favorite! Phyrexians for everyone! When Urza's Saga dropped, I bought 2 booster boxes and pulled 2x Gaea's Cradle, which I still have in my binder!

I took a long break from the game in the early 2000's because my playgroup totally fell apart as everyone got jobs, got married, and moved away. However, some of us have found our way back together and have met some new players, so we're able to squeeze in real-life paper matches once or twice a month.

One thing that's been fun for me is to go back and review my older cards! I often find some serious gems I had overlooked previously because I didn't understand the game well enough to realize how powerful they were. One of my favorite hidden gem cards is Recurring Nightmare. At the time, I simply didn't appreciate what it was, but over the last 5 years or so, I've become the graveyard's biggest fan! I've also found other hidden gems in my collection such as Yawgmoth's Will, Lake of the Dead, Survival of the Fittest, City of Traitors, etc...

I can't begin to tell you how excited I've been for the game since last Fall. Dominaria United, The Brothers' War, Phyrexia: All Will Be One, and the coming March of the Machine! Dominaria is still my favorite plane and the Brothers' War and the Phyrexians are my jam!

I'm crossing my fingers & toes that we'll witness the return of Yawgmoth! It's the arch-enemy we all deserve!

You also really could use more creature removal. Baleful Mastery, Deadly Rollick, Dismember, Snuff Out, The Meathook Massacre, etc are critical, since your life total is so important, you need a way to eliminate creatures which pose a serious threat, or to allow Kârrik to pierce your opponentâs defenses.

Your land strategy is unfortunately too slow for competitive play, and you are running too many lands. You should cut down to 30 total lands and focus on Lake of the Dead, which can be useful during the early turns, and drop Cabal Coffers and Cabal Stronghold, which will take way too long to become relevant. If you canât combo out by turn 4, you are probably doomed, and these lands wonât help.

Check out my list for more ideas: KâRRIK, LORD OF THE STORM [cEDH Primer]

Out: Lake of the Dead

Still working to smooth out and perfect the mana base in this deck - Lake of the Dead has just been too punishing for the amount of ramp it gives. It performs much better in a mono-black deck. Bottomless Vault is somewhat the same concept but more stable so I'll give it a try before putting in a basic Swamp.

I wish! Haha. Lake of the Dead and Yawgmoth's Will are two more cards that will probably be forever out of my price range, sadly. :(

I was considering the Corpse Harvester because 3 of the 5 Undying creatures here is a Zombie... and more Ramp is always cool..

The way I saw it, Imperial Seal & Corpse Harvester would replace Read the Bones & Gray Merchant of Asphodel, respectively..

The only reason I'm not auto-including the Wasteland is because of running Cabal Coffers, Everglades, Lake of the Dead, Bubbling Muck, and Mutilate.. 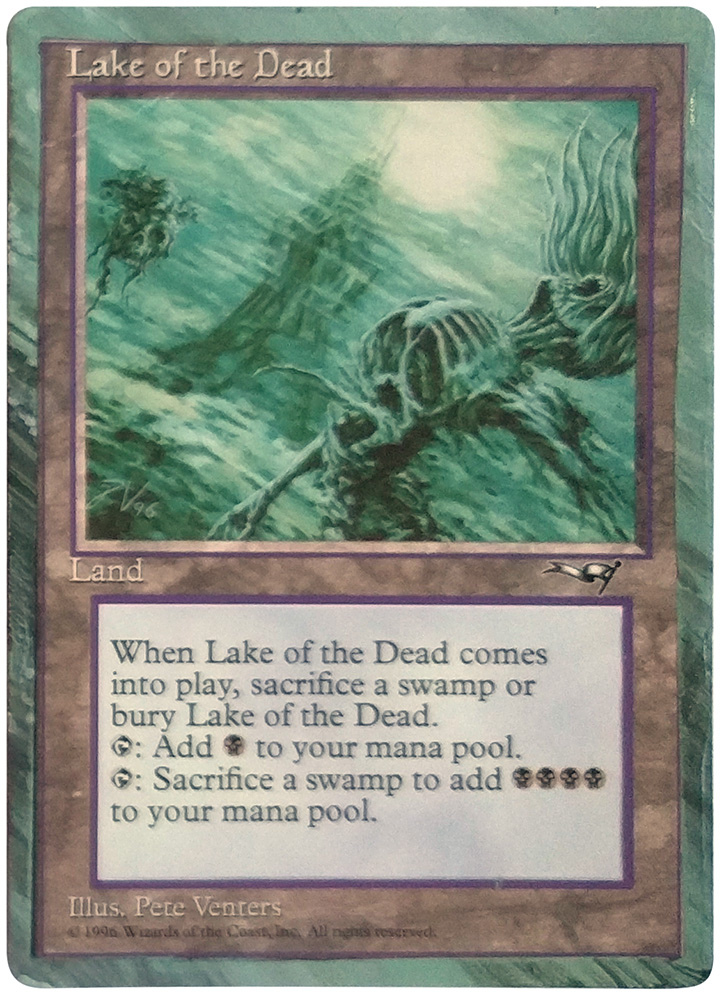 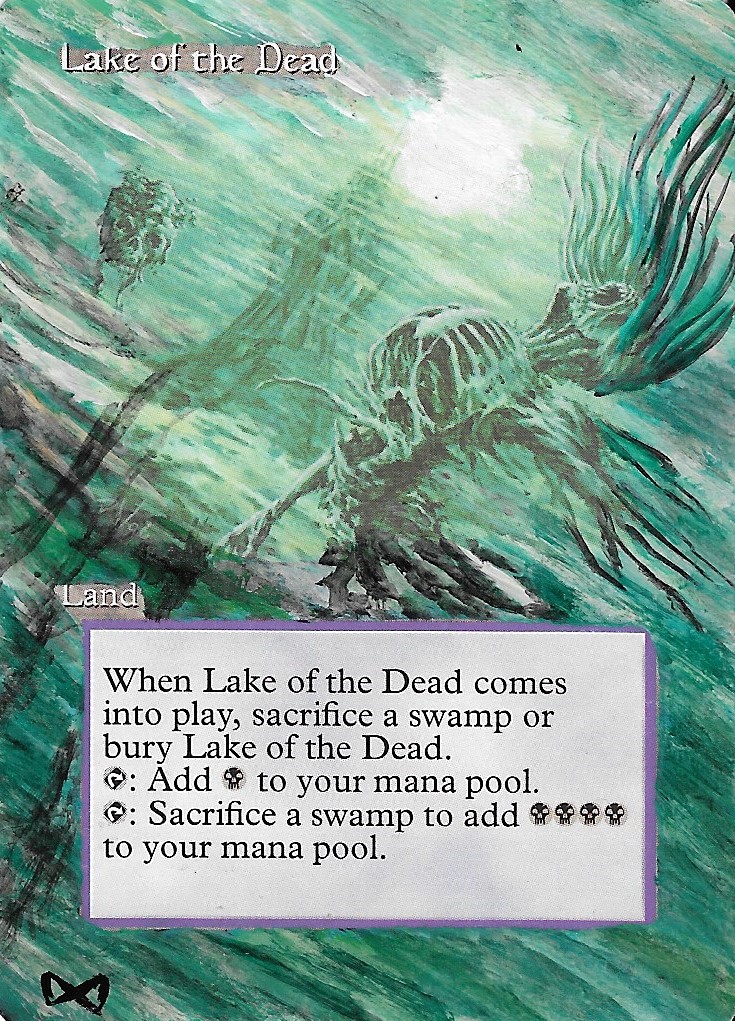 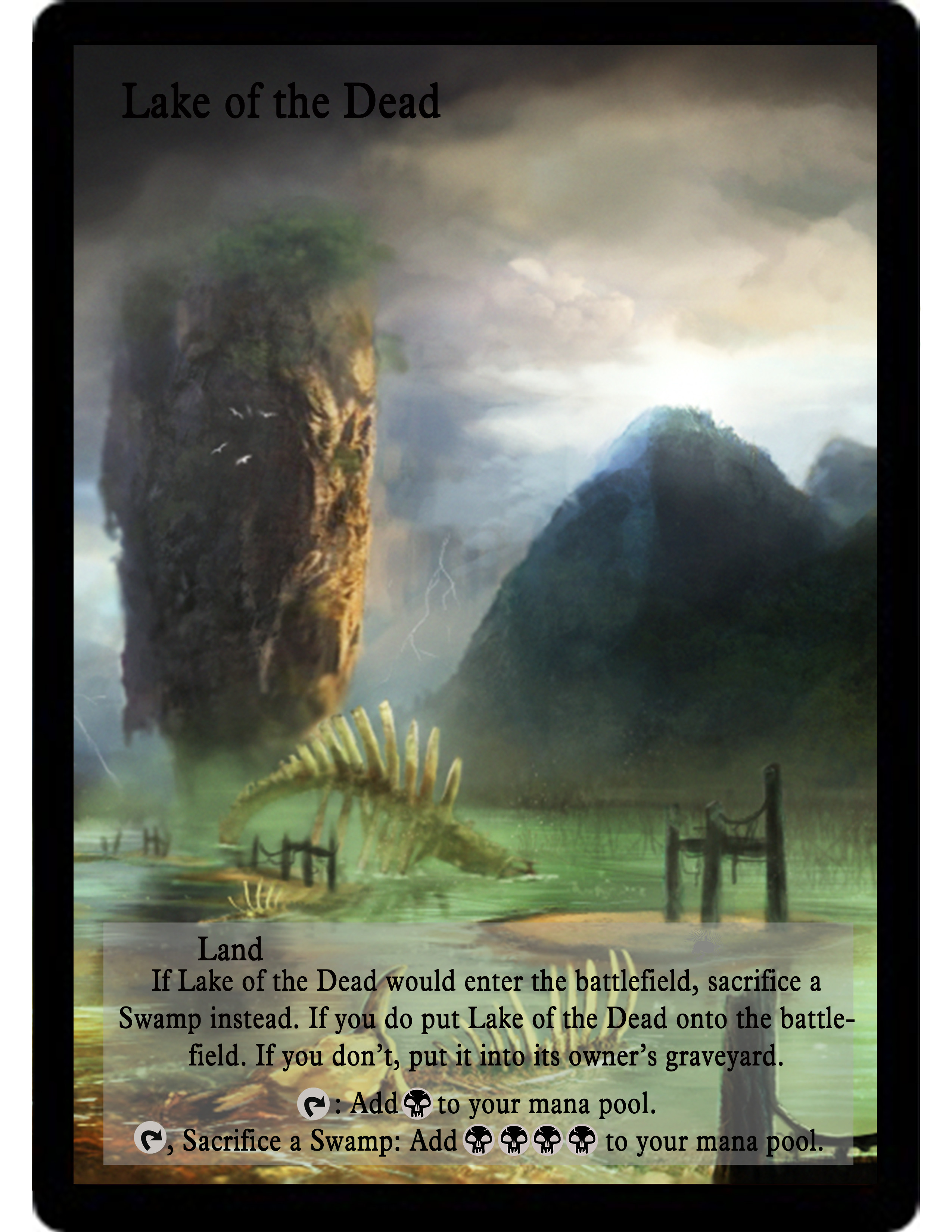 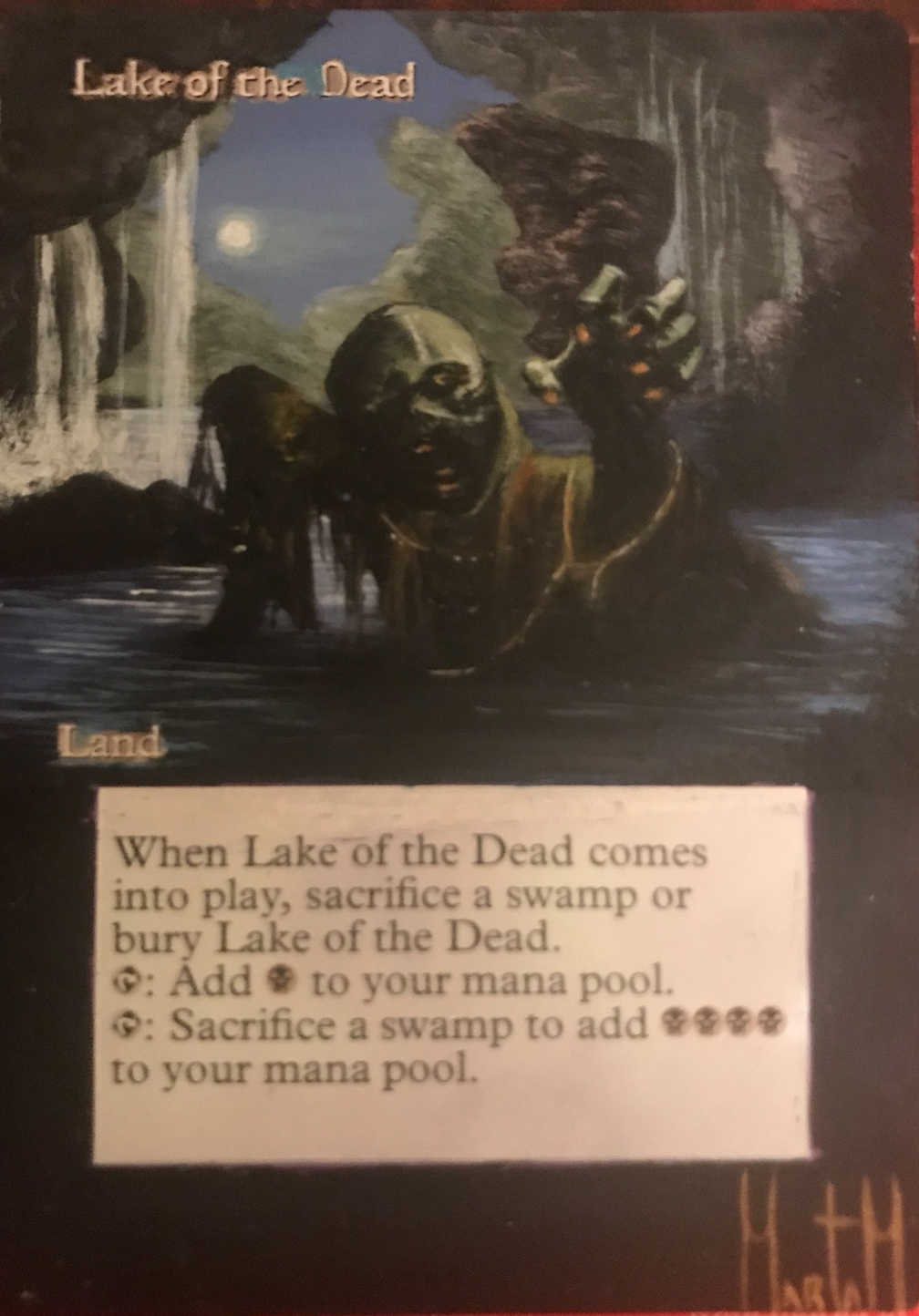 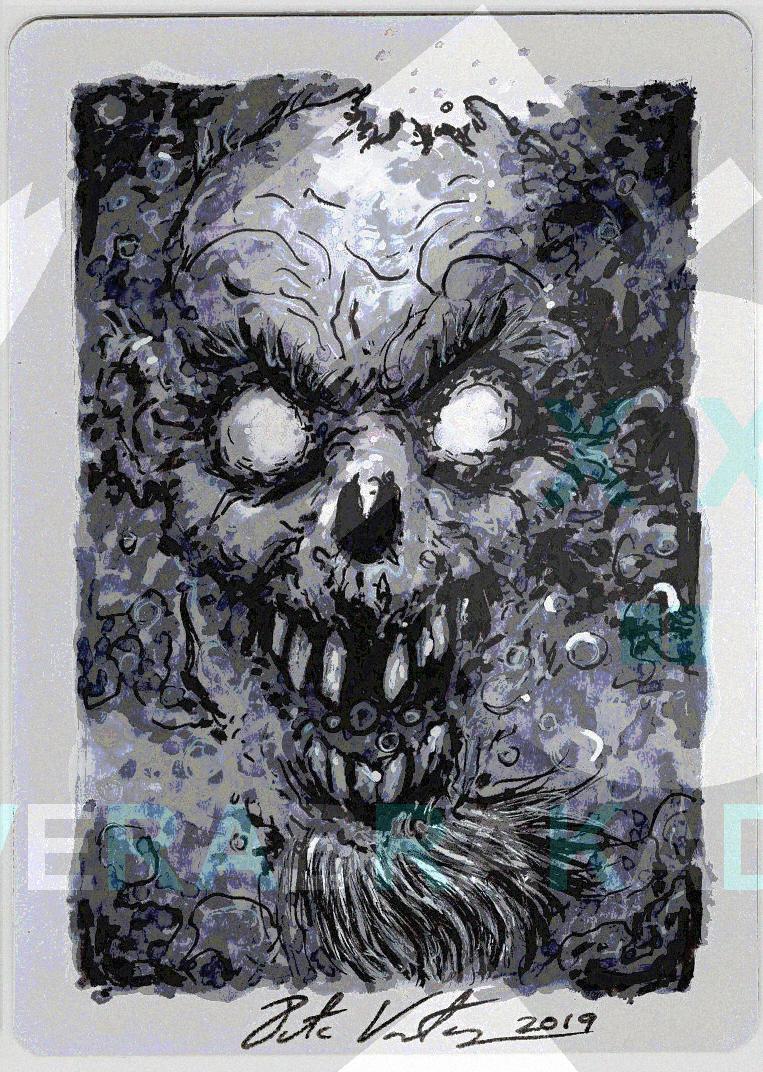 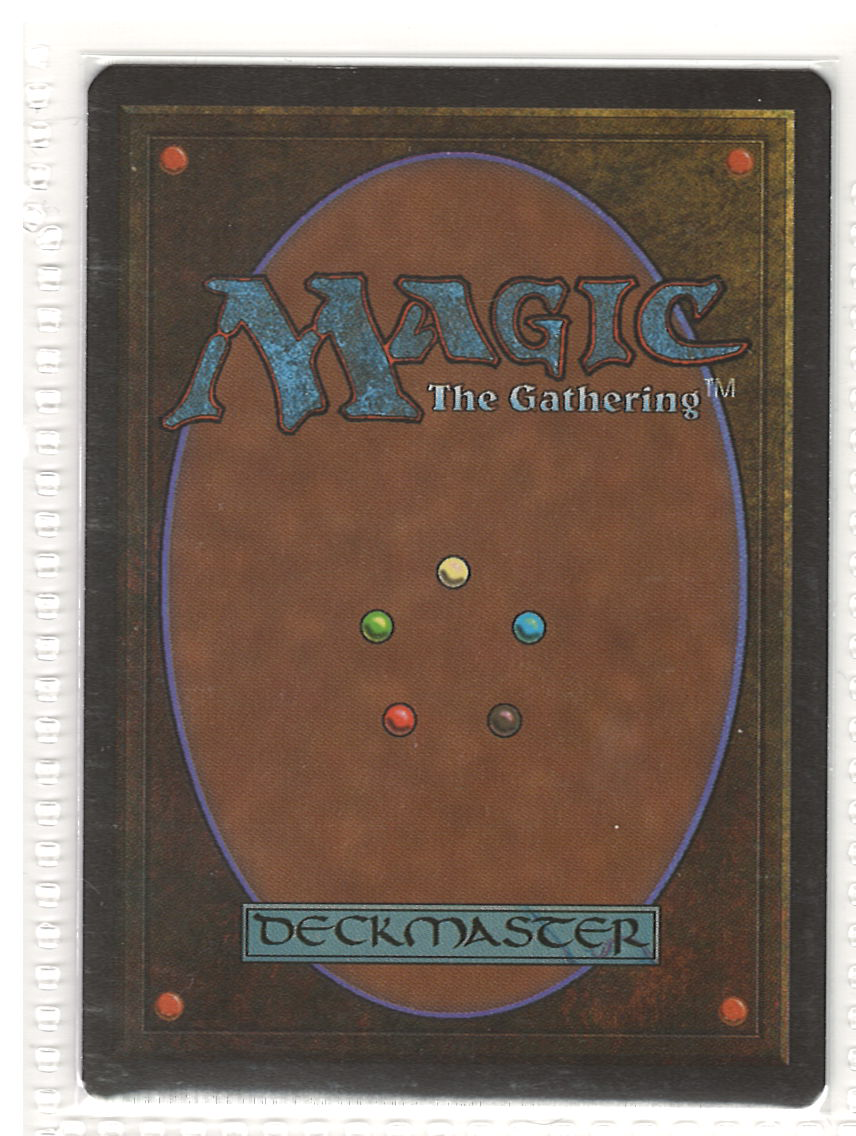