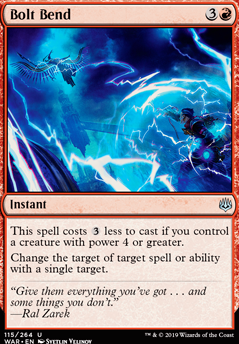 This spell casts less to cast if you control a creature with power 4 or greater.

Change the target of target spell or ability with a single target.

Bring on the Thunda!!!
by jstewar6 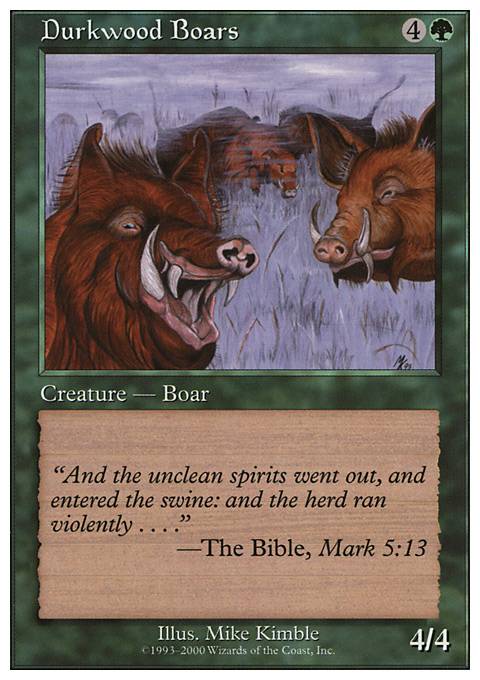 Ashling Burns Everyone
by wwormell

Blue isn't terribly problematic in my meta for worrying about any individual creatures. Most of the time they want to protect their combo, interrupt someone else's combo, or can't stop my creature with their Swan Song anyway. The idea is that when my big beater gets removed I have another one coming out behind it, anyway. A bigger problem I run into is the crack back when I do get a good hit in, and get to a point where I am more worried about my life than my cards in hand or the beater on the board. The blue in my meta does what most blue players do, I think. They let the tutors, of which I run quite a few, slide so they can counter what gets pulled out. But I am not assembling any combos, here. That being said, the card I do race to tutor for, the hidden Commander if you will, is Ilharg, the Raze-Boar which does allow me to cheat out big beaters or abuse ETB triggers. So to jump around while responding, Worldspine Wurm rarely gets hard cast, and Verdurous Gearhulk is a great way to make threats bigger. Bonus points for it because it can target itself if I just need an 8 power trampler to get 16 damage in the turn after Xenagos makes his debut. I have better places to put Deflecting Swat since the two key players in the deck are pretty difficult to get rid of. It, and Bolt Bend are extremely useful for commanders with less built in protection, though. That being said, I have looked at Yavimaya Hollow for everything not as resilient and just can't bring myself to put in another colorless source regardless of its ability. And since the beaters are replaceable, usually, making sure my mana is fixed is a higher priority. If anything, I am trying to find reasons to take some out in favor of basic lands (or a dual land if I really want to break the bank). Selvala, Heart of the Wilds is another situation like Nyxbloom Ancient where it urges an overcommitment to the board. I'm also not a fan of symmetric boons, so the thought of giving my opponent even one draw trigger from her bothers me. Call me crazy, but this deck isn't handing anything to anyone! Berserk is in the same vein as Life's Legacy to me where I want my opponents to deal with my creatures instead of sacrificing them myself. I also don't like looking at cards together as valuable given that I can't reliably guarantee they always show up together. This deck can tutor out a creature easily enough, but not an instant. Etali, Primal Storm is good value, but with my strategy being cheat with Ilharg, the Raze-Boar the attack trigger isn't as appealing as I would like.

On that note, I am still mulling over Return of the Wildspeaker versus Rishkar's Expertise, especially while I am trying to fit Quartzwood Crasher into the list which expands my options at 5 CMC. With the abusing ETB triggers idea, though, cards like Elemental Bond, Guardian Project, and The Great Henge draw more cards than you might think. I also swapped in Bonders' Enclave over Winding Canyons to try because I never really needed to cast a creature at instant speed. Holding up 6 mana to throw out a Reclamation Sage or Fierce Empath on someone's end step just feels like a wasted turn. For being a "Gruul smash!" list, I am trying my best to put together a consistent game plan with the heavy tutor package and a curve that promotes efficiency. I think I will hold up 4 mana with a Krosan Grip or Chaos Warp in my hand that can turn into a drawn card if I didn't need to stop something more often than the former example.

Play testing is still a challenge at the moment, so changes are a slow process. I know with adding in something like Quartzwood Crasher that the trample keyword becomes much more valuable, but there is a good case to be made for the creatures in the list without it, too. Guess we just need to stay safe and play more Magic!

Bolt Bend is for that Combo Turn, as Worldgorger Dragon activates it. Otherwise, Anje Discard fodder (and I'm okay with that).

I have not kept up to date with miss Anje, however you can certainly add Breach as there is a ton of things to exile with it, but it'd only provide so much value. As Aiden mentioned, Bolt Bend seems odd: go ahead and swap it for Deflecting Swat instead for an always on, always 0 way to deter nonsense.

My fellow party animal, Realm Seekers has been searching for this type of party! 4 players with 5 cards each + Xenagos trigger = 40 power! Given the amount of draw most players run, this often gets bigger than Malignus. Bonus points for being able to give itself trample by tutoring up Kessig Wolf Run!

Iâll also second Bolt Bend. With the size of our party animals, Iâve never not paid just one red. Wild Ricochet is a solid option as well .

Suns_Champion Thanks for the comments! I think you make some really good points with regards to protection. Typically the early game hate bears keep my stuff on board or disrupt and slow other players enough that I can get a turn 3-4 Winota that allows for about 2-3 triggers. Then from there, I focus on keeping the board alive and maintaining momentum. That's where I think stuff like Deflecting Swat and Bolt Bend.

I'll be making some updates along the lines of what my ideal CEDH build would look like.

I'm not a cEDH player, so I can't discuss that aspect of the game, but I have some options you should be aware of.

You have a very different creature set up than me. Fascinating. I'll have to consider some of these, though I'm not a fan of playing stax or control or hatebears myself. My deck resolves around creating tokens turns 2-3 with Krenko's Command effects, Winota turn 4, and swinging with hopefully 4+ triggers. Then it is a matter of protecting my stuff and closing out the game the following turns.

Alternatively, you can sit back and wait for the late game, great a massive army of tokens, and snipe the win.

Winota is the linchpin of the deck. If she's not out, we're screwed. Here are some things to consider:

Anyway, I like your deck. It's very different than mine, which is good. Cheers!

Humble Defector - Draw , politics. Add Homeward Path for synergy and to ensure they dont take your commander with an enchantment (or anything else) and you're just stuck twiddling your thumbs.

Command Beacon - For when he becomes too expensive to cast

Overall the list is ok. You just need a little more ramp as well. If you want suggestions for more adds and cuts, lmk. Youre deck is way too reliant on your commander if you use lose him, you lose.

Some of these suggestions might not be strong enough, but I think Firestorm is an going to be one of the best non-counterspell interactive spells for this deck. Rites of Refusal deserves consideration for a slot over at least Counterspell despite not being a true hard counter.

Along the line of Firestorm, Conflagrate and Turbulent Dreams can be considered at the same time. I think Ideas Unbound probably doesn't make the cut, but is worth consideration. These are all probably stronger than Flux, which seems to be the weakest link currently.

What are your thoughts on commander dependent pseudo-, Deflecting Swat and Bolt Bend, for decks with a strategy of getting their commander out by turn 2?