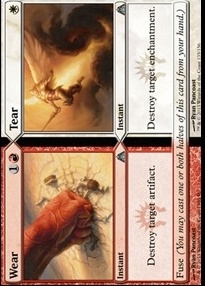 Wear / Tear occurrence in decks from the last year

DrunkManSquakin666 - hey there, thanks for the suggestions. Mistveil Plains is currently in the deck, and Tithe has been on the radar (I'll add it to the WIP flex slots section) but is not currently in the deck as I needed the slots for other things and so far Weathered Wayfarer is doing a good job at that. I do like Tithe though, the ability to Sunforge for it could be relevant.

Hide / Seek is also currently here, good card. I prefer it over Wear / Tear. Fight to the Death is new to me, thanks.

Curious to hear what you envision the use-case for Pull from Eternity being?

Importantly, Adventurer cards are the exception to this. Most split cards have a CMC that is the combination of the two halves. For example, Wear / Tear has a CMC of three, so it couldn't be used with Lurrus as your companion.

I used to play upgraded Vampiric Bloodlust a lot. You need either a lot of cheap vampires (1 and 2 CMC) + some card draw and play as much vampires as fast as possible, or a lot of recursion, since there usually is a lot of wraths. I recommend these cards (I consider them to be Edgar staples):

Latest version of my Edgar Markov

I definitely want to test around with Wear / Tear though I am concerned about gods being indestructible becoming an issue. Honestly if I had more copies of Skullcrack , I would run more. Since Pioneer was announced, people really have become hesitant about trading those away. Love that card. Not quite the value of some of the other cards on the list but it is mind-game gold.