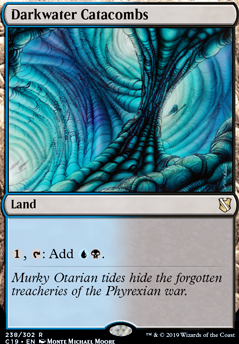 Darkwater Catacombs occurrence in decks from the last year

Make your own commander!
by Santapwner

Shadow of the tiger variety
by renegadelephant 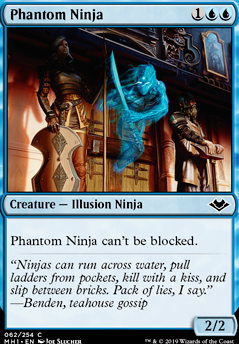 Soldevi Excavations and Thawing Glaciers are too slow for the deck. You can not afford to play lands that don't tap for mana right away. Reliquary Tower just makes c-mana, which is a bit risky when you run a low land count (Ancient Tomb is an exception, since it makes 2 mana, which is too good). You could consider Reflecting Pool and Darkwater Catacombs as a budget option, if you're looking to run Tainted Pact and do not have all fetchlands + old duals. Thought Vessel is not a Tier1 mana rock, since it only taps for c-mana (Signets + Talismans are better). And it's handsize effect is not so relevant for Kess. We can play most spells with Kess if they are in our GY anyways. Hope that thelps.

What are your thoughts of these lands and mana rock in the deck?

Hey, Persistent Petitioners with Ashiok, Dream Render and Planar Void make a deadly combination for mill. Ashiok is good because for one loyalty he can exile all your opponents graveyards and you can do this up to 5 times. Mill is risky as a main strategy in multiple player Commander because graveyards are a huge resource for most decks; an extensive of an opponents hand. Exiling graveyards means opponents can't use graveyards as a resource after you mill them. Void exiles any card that's put into a graveyard, this includes your own cards, but this hurts your opponents much more than you because of mill.

You can have any number of Petitioners in your deck and they're two drops with 3 toughness. Tapping four Petitioners makes an opponent mill 12 cards. This is a good backup plan for Phenax who will not always be on the battlefield to mill your opponents. You can tap four Petitioners even if some of the them have summoning sickness which can speed up the mill of your opponents. 20x Petitioners is $20 which is budget, Ashiok is $2 and Void is less than $1.

CrimsonChaos on More cards being flagged

In my decks I'm showing Darkwater Catacombs , Boros Garrison , Cavern of Souls , Caves of Koilos , Dragonskull Summit , Evolving Wilds , Rakdos Carnarium , Sunbaked Canyon , Vault of the Archangel , Chromatic Lantern , Anointed Procession , Butcher of Malakir , and Cordial Vampire all as illegal in EDH. Also, the new cards from C19 have not yet been updated for legality, but since the official release is today that isn't terribly surprising.

I agree with Pikobyte on the protection options; they are all pretty great. Another option you could consider in the way of protection is Shielding Plax ; I prefer this over Diplomatic Immunity since it has the option of drawing you a card.

Now, as for making the deck faster, I prefer to [along with the more premium ramp spells] run some includes that synergize with Muldrotha, like Font of Fertility and Wayfarer's Bauble . Also, Burnished Hart can be pretty alright, but may be a little slow (Test it). I would cut Primal Growth and run faster ramp too like Rampant Growth , Farseek and Nature's Lore . I don't think this deck needs the extra card advantage from Cultivate either, so don't run that. The deck also can recur mana dorks if they die, so Llanowar Elves are a great card here, along with their functional reprints.

I like to run Seal of Doom as more redundancy for your removal.

I would upgrade the mana base - doesn't have to be anything too fancy, just some Kaladesh fast lands, check lands, and pain lands in place of Temple of the False God , Dimir Aqueduct , Darkwater Catacombs .

I would also consider adding/replacing mana rocks that can sacrifice themselves for benefits. ( Commander's Sphere , Mind Stone , Hedron Archive ). They will let you dig for your combo faster without giving up much of an opportunity cost.

[As for cuts, Phyrexian Delver feels unnecessary, as does Apprentice Necromancer . I would also try to find a balance between all permanent types (maybe even run some planeswalkers) in order to get the most out of Muldrotha.