Akroma, Angel of Wrath occurrence in decks from the last year Akroma, Angel of Wrath
by floresjc33 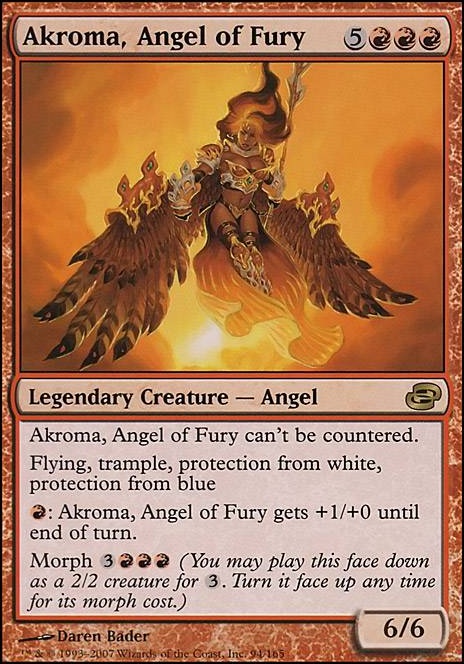 Azor, the Lawbringer
by charlie2beards

Baneslayer Angel and Akroma, Angel of Wrath are my top picks.

DemonDragonJ on What is Your Opinion of ...

Probably one of the better lists I have seen thus far. Most lists are terribly optimized.

One suggestion here is to run Avacyn, Angel of Hope over Akroma, Angel of Wrath.

That being said. Play to your budget too! :)

Isn't it the opposite though? Akroma, Angel of Wrath Provides flying, first strike, trample and vigilance since haste isn't carried. Zetalpa, Primal Dawn provides flying, trample, vigilance, indestructible, and double strike upgraded from first strike and gives a total of 5 +1/+1 counters to Kathril compared to Akroma's 4 for the same mana cost.

If you are going to be playing an angel tribal deck, I have some suggestions.

Avacyn, Angel of Hope Is the superior Avacyn to the version you have in your deck. I donât know if it is outside of your budget, but I run it in my Mardu Angels modern deck, and it works wonders.

Gisela, the Broken Blade and Bruna, the Fading Light can work good in your deck. If you can merge them together, it creates a huge threat, and is still an angel, despite being an eldrazi.

Of course Platinum Angel is good.

multimedia Thanks for your ideas, especially Phyrexian Reclamation seems to be a very good addition, also Kami of False Hope is for sure another choice.

The thing is, that Buried Alive is already in two of my decks included (Doomsday Plot (Lazav), Crosis Reanimator). I don't want to have another graveyard based strategy, although each graveyard deck is different in their own way. I dispense including Zetalpa, Primal Dawn (and other heavy creatures like Akroma, Angel of Wrath, because those cards would be played very late in the game - and also removed very fast.