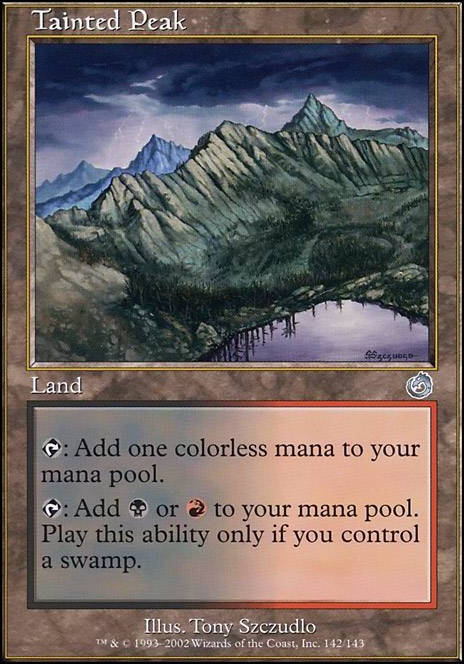 Tap: Add (Black) or (Red) to your mana pool. Play this ability only if you control a Swamp.

Tainted Peak occurrence in decks from the last year

Kaalia of the Vast, 2.0
by crazycatman

We stand together
by Sapient09

Story Time: Snow White and the Seven Dwarves
by shivanlord

Oh, also, I think shoring up the manabase should be a priority. I happen to be fairly familiar with building 3-color wedges on a budget, though, since I've had a dollar Shu Yun, the Silent Tempest deck for a while. With 11 basic Plains, Clifftop Retreat and Isolated Chapel are both $3 dual lands that you can really take advantage of with a basic-heavy manabase. Castle Ardenvale isn't exactly a free-roll, but if you keep your Plains count high, it makes humans and is likely to be an untapped colored source. Temple of the False God is an awful card for a 3-color deck playing so few lands. You need to get to 4 lands to play it and it makes colorless mana, meaning you're effectively playing a 34-land deck. I'd get rid of that and two spells, then add in Clifftop Retreat and Isolated Chapel at the very least. There's other budget lands like Foreboding Ruins, Tainted Field and Tainted Peak, but your color distribution doesn't seem built for them.