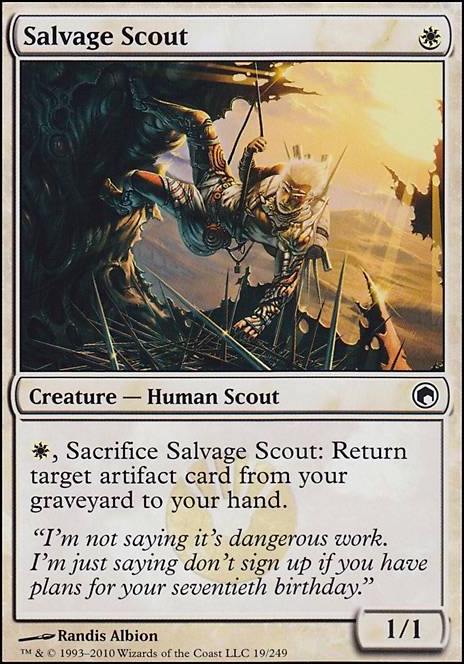 Cool deck!!
Sigarda's Aid seems good.
Inventors' Fair seems playable.
Salvage Scout or Buried Ruin allow you to return a destroyed artifact.
Not sure if you would run any of Lapse of Certainty or Pyroblast or Tibalt's Trickery for your sunforger package.
Just some ideas cheers!

Ohhh yeah. Also, just another "Construct" for Scrapyard Recombiner (though it is not currently in my list). So, Salvager of Ruins makes for an excellent Apostle. Hell, maybe even the best Apostle this list could have received. It will replace Restoration Specialist , as she only fulfilled a niche role in the list. Either Ranger-Captain of Eos of Recruiter of the Guard can hunt down our Salvage Scout , should the Lion's Eye Diamond line be made available. It's important to note two things in concerns to Salvager of Ruins: 1. It can go off without a Sacrifice outlet; 2. The Answers/Rewards we use must have been removed from the Battlefield -> Graveyard that same turn, so it's a bit trickier to set up, however... It is an auto-include for it's massive potential, as it returns any permanent. It isn't only a recurring combo piece, it's protection. I absolutely love it.