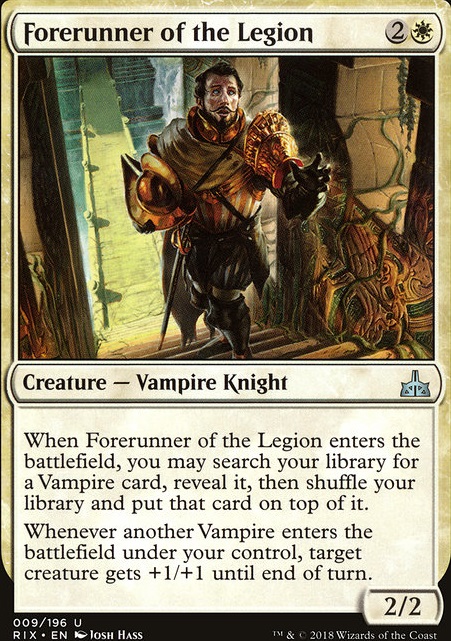 Forerunner of the Legion

When Forerunner of the Legion enters the battlefield, you may search your library for a Vampire card, reveal it, then shuffle your library and put that card on top of it.

Whenever another Vampire enters the battlefield under your control, target creature gets +1/+1 until end of turn.

Forerunner of the Legion occurrence in decks from the last year

Edgar Markov and the Aristocrats
by TequilaSamurai

Forerunner of the Legion Discussion

Good suggestions! I originally had the signets in but talked with another user who ran the deck without them so I cut them. I could add them back in.

I was trying to stay away from a bunch of tap lands but I guess theyâre okay in Commander compared to Modern.

I already have Forerunner of the Legion in.

Iâm not sure if Iâm gonna build this deck, Iâm leaning towards the Adeliz deck.

The deck could use some more ramp options and fixing. Some budget format staples for this include Evolving Wilds , Terramorphic Expanse , and Ash Barrens are all good cards to help you get the colors you need. For ramp, you're pretty much going to be stuck to artifact-based ramp, so Sol Ring , Rakdos Signet , Boros Signet , and Orzhov Signet are all good options for this deck.

I would also recommend upping your spot removal portion of the deck. You've got good wraths, but sometimes you don't need to blow up all of the things, especially if that would mean losing your own artifacts or enchantments. Return to Dust is very good. Even just a Disenchant could be a decent addition. Also just as fun synergy for creature removal, Crib Swap counts as a vampire spell, and so would give you a vampire token if you cast it.

You've got good card draw, but a couple other suggestions, Twilight Prophet is great for drawing extra cards and has obvious synergy, and Mentor of the Meek will let you draw cards whenever your commander makes a token (and speaking of, Anointed Procession will let you make twice the tokens)

Lastly I'd recommend Forerunner of the Legion since it's a solid tutor for this kind of deck.

My own Edgar deck isn't really refined since I built it a while ago, but if it's of any help, you can check out what's currently in it as well.