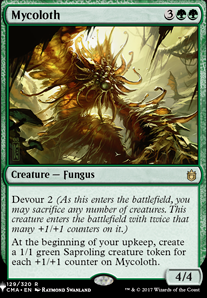 At the beginning of your upkeep, create a 1/1 green Saproling creature token for each +1/+1 counter on Mycoloth.

Mycoloth occurrence in decks from the last year

Thelon Welcomes you to the Fungal Jungle
by mrmayhem2

I also play a experience counter atraxa similar to yours. It's so much fun because you have so much synergies in the deck! I can highly recommend:

Thanks for the upvote and recommendation kpres!

I prefer Fires of Yavimaya in this instance because it can be used as an "emergency" sac outlet in that it can sacrifice itself at instant speed. Is the card draw and +1/+1 counter on Korvold, Fae-Cursed King worth it? I suppose it depends. I don't begrudge you preferring Rhythm of the Wild, for sure. You're right that making your creatures un-counterable can be huge in certain pods/metas.

One of the largely invalid reasons I don't like Rhythm of the Wild is, in an already pretty grindy deck, on MTGOnline the Rhythm Riot triggers would get old FAST if a card like Mycoloth sees your Upkeep step with enough counters on it. And there aren't as many times in this deck where it's to one's benefit to opt out of haste and go for the +1/+1 counter instead (not that you said that).

Often, if I do run Fires of Yavimaya, I'm running Rhythm of the Wild too. For this deck, though, the build is just too tight. I have no idea what I'd cut for the second "haste-granter". I have a similar sentiment towards Fling.

Speaking of Fling, you could conceivably knock one person out of the game with it but without copying it three times taking everyone out at once, I'd rather save the deck slot for something that grants a bit more synergy for consistency's sake.

Don't get me wrong, I love the card. I made an entire deck that's designed to Fling your library at all of your opponents simultaneously using the un-card Animate Library but I just don't feel like it's a silky smooth fit here. For the same surprise factor you might be better off with adding one of those Infect-granting sorceries (shudder).

This is the Animate Library decklist if your curious: https://tappedout.net/mtg-decks/throw-your-library-around/

Again, thank you for your input and I hope that I answered your questions to your satisfaction!

Rotting Regisaur could be worth a look. It's big, works with Alluren, and can get cards out of your hand and into the graveyard. Plus anytime you don't want to discard anymore you can just sac it

Greater Good might be worth a consider. Anytime your big creature is going to die you can get tons of value off of it and put cards in your graveyard at the same time.

Thank you so much for the suggestions and advice. In trying to make a "casual" deck to have something for my non-cEDH friends, I ultimately had some hold-overs from previous iterations. I need to remind myself that casual can still be high-power. I made a bunch of changes that will pay off nicely and are already smoothing out playtesting.

The only spot I'm really testing at this point is Champion of Lambholt, but I'm giving her a chance for now. Again, thank you very much.