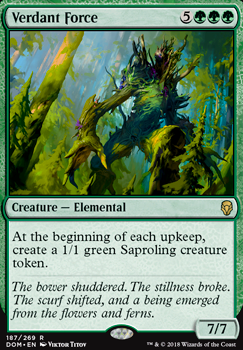 At the beginning of each upkeep, put a 1/1 green Saproling creature token onto the battlefield. 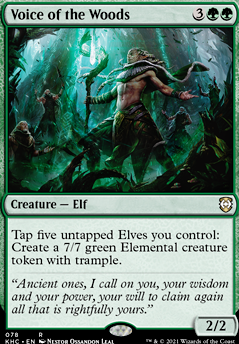 You should try Bitterblossom instead of Verdant Force ! :)

Beledros Witherbloom: Oof, as usual , pretty expensive in EDH. At least it's cheaper than Verdant Force , and untapping all of your lands without spending mana is obviously going to be explosive; probably not super hard to combo this for infinitive mana

Pre-modern is a format that certainly has a lot of appeal to me. I am myself in the process of constructing a pair of pre-modern decks, and revived my old Fires deck of back in 2001.

I also built a pair of decks for Urza Block Constructed, and there are a lot of nice cards in that block to use in a mono-green pre-modern deck too.

Cards you might consider, if those are not in your deck already, are Exploration and Saproling Burst . Blastoderm is another power meanie at 5/5. And even though the Albino Trolls are no big hitters, they are available turn 2 at 3/3 with Regenerate.

Something else that should not be overseen lightly, Treetop Village is a 3/3 creature, as well as a land. With Giant Growth it hits or blocks for 6.

With all that hitting power, there hardly is the need for Verdant Force or Skyshroud Behemoth to be very honest.