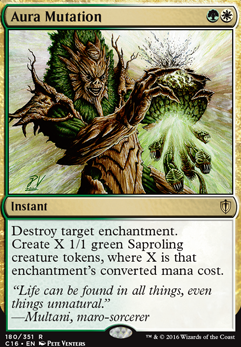 Aura Mutation occurrence in decks from the last year

Pop the Pro Counter
by Wozzy

You've got some decent removal, but I think Aura Shards would be better than Return to Nature and Aura Mutation is a great surprise army that can destroy a Caged Sun out of nowhere, for example.

In terms of cards to cut, Emmara Tandris is really overpriced for the body and the ability. You are also playing a bunch of untappers which I don't quite understand, like Hyrax Tower Scout, Village Bell Ringer and Sparring Mummy. I see they work with Combat Celebrant, but that hardly seems worth a slot in your 99 and could be better served as some else. Marisi is a great card, but might not be good enough for this deck. Conclave Phalanx also seems pretty weak compared to other cards you could be playing. Spirit of the Hearth also seems a bit random. Elbrus seems fun, but not likely to do much. Removing these cards is going to help focus your deck with more synergy and also speed it up with more ramp.