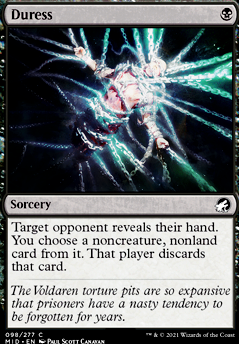 Target opponent reveals their hand. You choose a noncreature, nonland card from it. That player discards that card.

Copy and Obliterate
by DCros 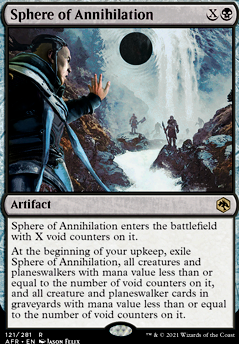 Hmmmm. Are you really ok with all the life loss? If you happen to need to go Fetch Land > Blood Crypt > Faithless Looting > Lotus Petal > Reanimate you lose a ton of life...

I was thinking you could build the "traditional" BR Reanimator but with Emrakul (without Street Wraith, Bauble, Cabal Ritual and Simian Spirit Guide). The traditional version has a 60-80% consistency of a turn1/2 combo already.

If you choose to do so you would have 16 free slots. You could go with 4 Exhume, 4 Collective Brutality for some counterspell protection, 4 other creatures of choice that you like and 4 Thoughtseize.

I'm speaking from the veteran BR Reanimate player perspective that the opponent will usually have something to deal with you. Usually it is Karakas, Innocent Blood, Sudden Edict, Liliana of the Veil or a counterspell or something. Sometimes you can even lose because their creatures alone are faster than you (if you lose 16 life reanimating stuff).

So adding some other options as a "toolbox" could be good. Big beater creatures that mess up their plans are nice.

About the sideboard I was thinking the Wastelands may not be too effective.

If you are worried facing against troublesome Lands deck, I would recommend Magus of the Moon (since you can tutor and reanimate it). For creatures, usually a simple Pyroclasm does the trick. If you want to be fancy there is also Firestorm that may enable your combo.

For interaction you'll usually be worried about opposing Grafdigger's Cage, Leyline of the Void, Rest in Peace, etc. So to counter that you can either splash another color (white/green) or deal with it the same way Mono Black Reanimator deals with it: Ratchet Bomb and Feed the Swarm.

If you see too many counterspells it is always nice to have cheap good old Duress.

I think Engineered explosives was a nice touch. Just as By Force.

I think you can have a more effective 'change the target' effect with Ricochet Trap with all the blue in Legacy.

Blast Zone is interesting, but with so much Wasteland in the format it becomes unusable quite often.

I don't know what decks you are playing against and maybe it already works just fine in your meta/playgroup...

But I'm a BR Reanimator player of 6-8 years with it and I wanted to give some insights :V

Wow this...... really, really needs work. I hardly know where to start :/ sorry but almost everything here is outclassed. Your mana curve is a little on the heavy side and your lands suggest to me you're working with a nonexistent budget.

Start by cutting everything over 4 mana, drop Feast of Blood because that card is terrible, add 4 Sorin, Imperious Bloodlord, Fatal Push and 4 of either Thoughtseize, Inquisition of Kozilek or Duress. For what you're working with i'd just cut the red and run monoblack. 22+ swamps is much less clunky than lands that enter tapped.

taylorfisdboss: Hmm, yes, fair point. Part of my reasoning behind them is to make this degenerate paunza deck a bit more ... idk "fun?" It's harder to playtest in a vacuum, and since it's pretty douchy, I don't really wanna subject my playgroup to a bunch of playtests either.

Silverbluff Bridge is a good idea though, I'll get some and make that swap. It's always good to have backup plans.

You did make me reconsider my approach here though. I searched for cards that might have better synergy, but there are no pauper cards that care about your opponent's lands LTB or ETG. There is however Roiling Terrain and Destroy the Evidence which got me re-strategizing. If I add black and things like Duress and Balustrade Spy... and Dark Ritual... but then... Hm.

I agree with ShieldOfHolyShadows: your Manacurve end's to high.
Exchange Rampage of the Valkyries and Starnheim Unleashed for early interaction, either Discard: Duress, Inquisition of Kozilek, Thoughtseize or Removal: Dismember, Bloodchief's Thirst, Fatal Push (if you have the Fetchlands)
Also you probably can exchange one Temple of Silence for a Seraph Sanctuary to help you with your lifegain.

Seems really slow honestly. My recommendation is to lower your mana curve overall and include a small selection of 4+ mana vamps you intend to cast with Imperious Sorin's -3. He's easily the best walker for tribal vampires, a distant 2nd being Liliana of the Veil. So Imperious Sorin should be a 4-of in every vampire deck he's legal in. You also are sorely lacking in hand disruption as well as creature hate to manage on-board threats. Thoughtseize and Inquisition of Kozilek if you have a budget, Duress if you don't. And of course the best removal spell in modern, Fatal Push.

Your lands seem to be universally very slow, which... I get it, fetches, mutavaults, urborgs, etc are expensive. If you go the deathtouch-heavy route I'd honestly say go the Rakdos path rather than Orzhov. Pretty much entirely because of Stromkirk Captain.