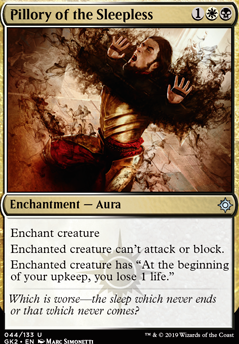 Enchanted creature has "At the beginning of your upkeep, you lose 1 life."

A matter of life and death
by Dangerwillrobinson79

Defunct: Be Best
by desmondwrite

Life it or Not I'm Healthy
by GamingTurtle56

Liesa, Shroud of Lifegain
by jbmakesnoise

Pillory of the Sleepless Discussion

Maybe you're already aware, but enchantments like Journey to Nowhere , Oblivion Ring , and Oubliette don't get Killian's discount.

Have you looked at Pillory of the Sleepless ? It seems in the style of this deck.

I think Phalanx Leader is one of the all-around best Heroic cards if you're looking to go that route. You should certainly run 4 of him.

I also recommended Prison Term recently on another build, and I think it'd suit you better here than Pillory of the Sleepless. I like how with Prison Term you can throw it onto any old critter and just let it sit there until a real threat comes along. Plus, a lot of builds seem to run off activated abilities which Pillory may not save you from.

Just my 2 cents though, nice job either way (I love Orzhov color decks in general) +1

As far as menace creatures go, I like Dreamstealer or Kheru Mind-Eater to deny the opponent of additional creatures. Red is also well known for menace since you gain access to Labyrinth Raptor, Sonorous Howlbonder, and the odd Sin Prodder. It also has a bomb in Master of Cruelties that benefits from a lack of blockers. Silent Arbiter can accomplish a similar goal to your auras when attacking if you don't mind embracing an exalted style, possibly via Sublime Archangel.

Another option could be to embrace the large number of auras with synergetic cards like Eidolon of Countless Battles, Kor Spiritdancer, and Sage's Reverie. Some other Arrest options I like are Pillory of the Sleepless, Prison Term, or the cheap Demotion.