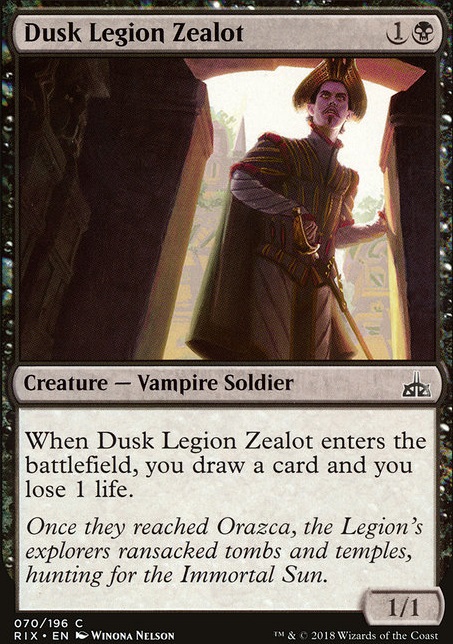 When Dusk Legion Zealot enters the battlefield, you draw a card and you lose 1 life.

Hey, I just updated the deck.

I played a bunch of matches yesterday against a friend of mine, who plays Kess duel. Unfortunately, I couldn't play with different decks.

His Kess is really control/removal focused. A lot of removals and counters, so it was really tough for me.

My main take was: I need more draw. I don't have much more draw spells that can fit the deck, but I include some cards like Cremate and Dusk Legion Zealot. I also think I had too much ramp spells, so I took off a mana dork.

Made some other changes aswell. And I managed to get a Ranger's Guile, thanks for the suggestions!

Anyway, thanks for the comments! Cheers!

Pretty cool man. Very straightforward but I think it has a lot of important elements. I think card draw is the biggest thing you're missing, but that is hard to do in black for sure. Sign in Blood is good because it can double as a burn spell, but I'd definitely recommend getting some more Phyrexian Ragers, and maybe some other ETB card draw creatures like Dusk Legion Zealot, which you can double up on with Gravepurge if you can get them into the GY.

Anguished Unmaking and Vindicate are better than Bedevil and Utter End Imo. I honestly don't think that Sorin Markov is very good for this deck. Sure he sets one players live total to 10 but I wouldnt want to pay 6 mana for that. Sorin, Imperious Bloodlord is pretty good as a replacement for him imo. I would definitely play Patriarch's Bidding in this deck.

Skyblade of the Legion is a really low impact creature. You don't have that much lifegain in the deck so I don't think that Markov Purifier is any good for your deck. YOu dont have that many Swamps so Nirkana Revenant propably doesnt do much.

Florian, Voldaren Scion Vampire Socialite Dusk Legion Zealot Kalitas, Traitor of Ghet are some Vampires that you could add

You have a pretty agressive creature base with a low mana curve which I definitely like. There aren't a lot of sac outlets in your deck so I don't think that Gravepact and Dictate of Erebos do much for your gameplan tbh. Your Vampires are so cheap I don't think that Herald's Horn does much.

I'm currently playing Night's Whisper in my deck as well but plan to replace it with Dusk Legion Zealot. Only draws one card but ads to your gameplan much better so maybe you want to consider that. What do you think about Patriarch's Bidding and Vampire Nocturnus (maybe you don't habe enough black cards for that one)

Also, I would personally either chuck the com-bo into the sun or go all in. Is this a combo deck, or an aggro/stompy one? Because if you're going aggro, you have 7 wasted slots, and if you're playing combo, you have 32. All in, or duck out. Simple as that.

If you want to go stompy, I'd personally recommend Nested Shambler or Grim Initiate for their Double-Lives, and possibly a full set of Myr Servitor for grindy matches. If going in for the combo, go with Viscera Seer, Dusk Legion Zealot, Street Wraith, and Sign in Blood; with an Impact Tremors in the back because Spoiler Alert: Control Decks don't care too much about your 99/99 Carrion Feeder unless you're able to wrestle them into submission with your lack of card advantage.

This is not meant to be harsh, just to say the reality. I wish we were in a Magical Christmas Land where this kind of decks can fly, however that is not the timeline we live in.

I don't know if the 2/2 body of Phyrexian Rager is important, but Dusk Legion Zealot from Rivals of Ixalan might be an even better substitute for Dark Confidant 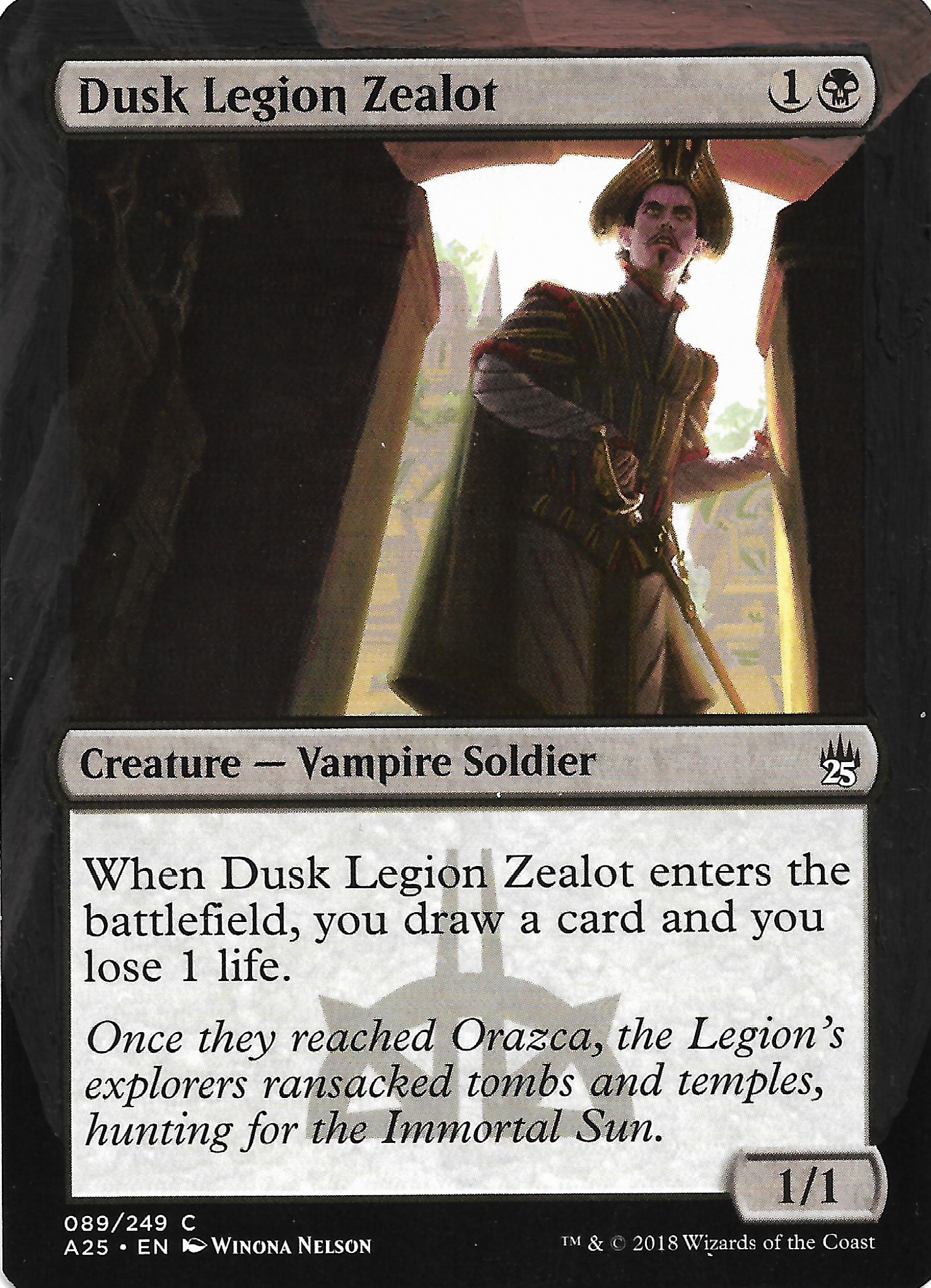