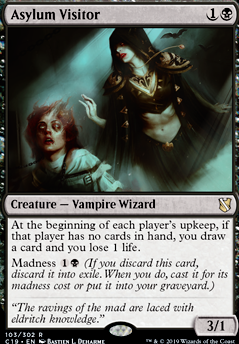 At the beginning of each player's upkeep, if that player has no cards in their hand, you draw a card and lose 1 life.

Asylum Visitor occurrence in decks from the last year

Tiny in Size, but he'll be your Demise
by DemMeowsephs

Thanks so much for your help. While Lurrus of the Dream-Den is something I will consider, and will probably swap Asylum Visitor out for that, I will probably keep Vraska, as I like the abilities to destroy creatures, and to draw cards. Plus, Lurrus will work really well with Vraska, creating an engine of sorts.

And thank you for your comment SynergyBuild, great points! Iâm conflicted with Dark Confidant. This is the thought process I used when deciding whether to run Bob:

Pros: Increased draw potential. Bob can be cast turn 1 and immediately helps dig for more lands. If Bobâs life-loss gets out of hand, you can kill him via board wipes. With less 5+ CMC cards, the deck will be more consistent if you donât draw ramp.

Cons: I think the handful of 5+ CMC cards in this build are important for it to function properly. I worry that all the life-loss from Tinybones, Bob, Necropotence, etc. may be excessive. Asylum Visitor is Bob-lite with Madness. The deck has the potential to generate so much mana thatâs itâs a shame to not run at least a few 5-6 CMC cards. Plus Necro lets me draw what I need at the cost of 1 life per card and is harder to remove.

Based on this analysis I decided not to run Bob. But since you suggested it, I will make a parallel list which runs Bob and fewer high CMC cards to test it out.

Cling to Dust is a great suggestion, I will consider what to cut for it. And Mikokoro, Center of the Sea is a card I overlooked since it gives your opponent a card, but you bring up an excellent point about Thassa's Oracle, so Iâm cutting a Swamp for it.

And 0rc, go for it! The Magus/Mantle combo has been around for a while. :)