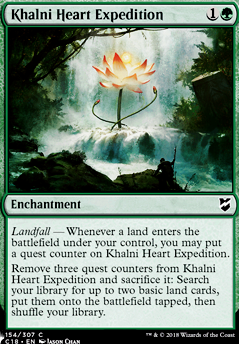 Hey there! One way to strengthen and upgrade your deck is through your mana base! Maybe consider some of the following lands!

If this helps be sure to check out some of my decks, (Double Trouble EDH *PRIMER*), give me suggestions if you have and support it if you like it- I'd appreciate it! Anyways though, good luck on your deck, hope this helps, and have a great day! Happy tapping!!!

Thank you for your interest in our bible, we hope you enjoyed thoroughly!

On the topic of your suggestions, our deck currently has a dwindling amount of defenders as it is, taking one of them out is not entirely our prerogative, especially one as convenient as the high toughness and immediate mana gave by Wall of Roots.

Burgeoning and Exploration are both great cards, however, our deck is not land heavy as it is. This does not make them any worse as T1 plays, which means they earn a spot in the Maybeboard for further testing.

Hey there! As a fellow Zaxara player, I have some suggestions you might want to consider!

Check out my Hydra deck here!

Zendikar Rising spoilers has started, and in the tradition of all Zendikar sets, it's time to reevaluate the lands matter decks.

Some updates: Zuran Orb out for Exploration. Decree of Pain out for Toxic Deluge. Bringing in a Heroic Intervention as well, in place of Price of Glory. I want some more interaction. Deflecting Swat is something I am currently very interested in. The new blue enchantment means I need to add a lot more enchantment hate. I am probably going to cut Mina and Denn, Wildborn for an Oracle of Mul Daya.

I am looking to revamp the mana base some. Cut cards like Rootbound Crag and Karplusan Forest for more basics. I'm gonna add some snow basics, and also cut one of my 3 mana ramp spells for an Into the North.

Comments about the new cards:

The new landfall extra combats is powerful but not what this deck is looking to do. I don't have many creatures, and most of the attacking ones are already heavy at the top end.

I am in love with the new double faced cards that are spells/lands. However, most aren't what I'm looking for. I am extremely happy to add these to my other decks, especially those with Karoos/Ravnica bounce lands, but I don't have those in this deck. The red mythic might go into this deck, as an untapped land and potential removal spell, but I haven't decided.

The new not-Avenger of Zendikar is interesting. I need to go more basic heavy for it, which I am already working on revamping the mana base. I have found myself a bit light on blockers recently, so another effect like this is not bad.

I am kind of surprised to say it, but so far my lands matter deck might not get much from a Zendikar set. Obviously the set isn't spoiled yet, and I fully expect a green mythic flip land will find it's way here.

BenWin: Sorry for the delayed response! I think there it is important to note that including worse versions of a card in a deck is alright while the "better card" is in the list as well. Evolving Wilds and Fabled Passage are perfect examples. Why not run both if you can? Hitting landfall at least twice a turn is a key feature of this deck. That is why we run 42 lands to begin with. I don't blame anyone for omitting Wilds, I just don't see the need to do so at this point.

The key reason I swapped in World Shaper is the crazy amount of creature ramp this deck runs now. I slotted in Dryad Arbor which turned Green Sun's Zenith and Finale of Devastation into great ramp spells early game. This increase in tutors paved the way for the Shaper change.

When it comes to my thoughts on Doubling Season, yes it is just a worse Parallel Lives, but that's ok. Just like the Wilds example above, and like DasTree and Rasaru said, redundant effects are great for us. You have no idea how happy I am that Terror of the Peaks is a card now! I will take all of these effects I can get. In fact, I find myself winning off non-combat damage A LOT more now!

My Om_rath deck is sitting at 10 draw spells, Return of the Wildspeaker being the weakest one. That being said, it is on the short list to be cut from the deck if a better draw ability is released. I do however think it is better for us then Life's Legacy and Momentous Fall do to its flexibility and also being instant speed.

Personally, I have won way to many games with Genesis Wave to cut it. Hitting even a bunch of lands is a great thing in this deck. I would also say the same thing about Command Beacon, it has to be my favorite land in the deck. Being able to skip commander tax for a commander as feared as Om_rath is amazing!

I hope you don't feel like am knocking back your ideas. The great thing about this commander is the vast amount of card options that are out there for us to pull from. I don't think a single card to added is without merit, I just like the way my deck is functioning right now. Thank you for the feedback!

Guerte: That win is exactly why I love Genesis Wave! If you somehow didn't win off of damage upon resolution you had way to much value not to win after that anyway! haha

Savag3B3ast: I think the deck is at a critical mass when it comes to wincons and sac-outlets so that is the only reason why those two cards are not in my list. They are great for sure, and can see why you would run them!

Savage1988: Congrats on upgrading the list! I am also a bigger fan of Life from the Loam however, Exploration is at a very low price right now do to the recent reprint, so it might be wise to get that now. Nevertheless, that effect exists on many cards, although not 1cmc, so there are many ways to fill in that gap at a budget. I would as strongly suggest grabbing an Azusa, Lost but Seeking right now! It nuts how cheap she is right now! OH, and you won't have to wait long for Lotus Cobra to be really cheap!!! (I will definitly be getting the new fancy one in foil!)

Also, if your going the Snow-land route, I can see Into the North being a good include for sure!

We got a couple spicy spoilers from the new Zendikar set for sure. Valakut Exploration seems cool, but putting a deadline on the cards drawn makes me unsure. Roiling Regrowth is a worse Harrow that might be worth looking at though!

AND just in case anyone doubted, I am for sure making a Omnath, Locus of Creation deck! To make it different then my other three Omnath decks, I am building him as a "multi-color creature tribal" deck, focusing on the second landfall trigger to get big splashy creatures out. I am also making a sideboard of any cool gold framed creatures I get hands on, sorted by cmc. Before a game I will pick randomly set amount from each cmc and fill out the deck. It seems like a fun new way to add some variety to games!