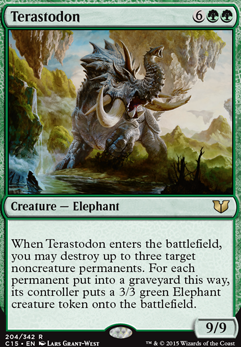 When Terastodon enters the battlefield, you may destroy up to three target noncreature permanents. For each permanent put into a graveyard this way, its controller puts a 3/3 green Elephant creature token onto the battlefield.

Terastodon occurrence in decks from the last year

Dotter of Erik
by ilovemydoghisnameistuna 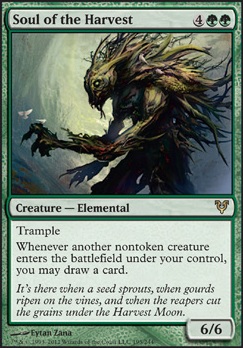 Maybe removing a few more of the straight vanilla fliers? As much to get it to 100 as to keep it to novel cards that spice things it up. I like that goblin ballon brigade makes you work for it... not efficient, but fun(ny).

Oh man, I remember I used to have a Soltari Foot Soldier... totally forgot about that card, but I remember loving the art when I had it 22 years ago. Bonus points for this one.

I like the cards that are giving other people creatures.. What about Descent of the Dragons as a removal for things that are hurting your strategy, and as a trade giving them beaters to hit your other opponents? Sharing is caring after all. Terastodon could also be excellent in the flavour of removal.

An eventual card to addâif this deck proves to be fun enough to keep together and do 1 or 2 little upgrades forâwould be Blade of Selves. Myriad cards could be great to explore in general, but it's nice to be able to choose which creature has it.

Primal Vigor? A sweet global enchantment, especially when you WANT to give other people tokens and counters.

I wish there was black in here... Clackbridge Troll (eldraine) would be fun.

With all the effects that grant trample, Terastodon can clear up a lot of problems, and trample largely negates the draw back, and if you want 18 power, you can just get 18 power.

Neat deck, I'm thinking of trying out this Multani as well, always thought he'd be a fun commander.

Sweet deck. Surprised no Woodfall Primus or Terastodon for removal.