I play EDH, I prefer to run Mardu colors always. No opinion is greater than another, but they're always worth discussion like they are.

Said on The combo potential â¦...

Personally though, you could substitute Lich's Mirror for Angel's Grace and still win that way too.

@LeaPlath, I was thinking something along the lines of a Phoenix Lord, but I felt it would have been boring if it just "pumped" phoenixes.

Phoenixes tend to make pretty good recursion creatures, but how each phoenix is recurred to the battlefield varies wildly which makes it hard for a commander to devote to that tribe, so I half-devoted to phoenix tribal with this so you can run it in a non-tribal deck if you want too.

How it devotes to phoenixes are; it has a pretty standard phoenix recursion effect, it is a "phoenix" in its creature-typing and you get card draw and wider field presence off of sacrificing phoenixes. Now of course I could have specified that only phoenixes could be sacrificed and I could have made the creature tokens phoenixes themselves, but as I said devoting to phoenixes is already complex enough as it is which would mean how the deck would be built would be incredibly tight and would have a lack of room for variance which I didn't like. Hence why I didn't over-commit and why I made it black and white so that other reanimation strategies could work if you weren't devoting entirely to phoenixes.

Given its a phoenix it only makes sense that it would have flying and haste. Those aspects would have been mandatory along with the reanimation effect. The reanimation effect didn't have to be land discard, but I didn't want something you could just pop off whenever you want as that's kind of Derevi, Empyrial Tactician's thing. Well, since the recursion practically neutralizes the command tax why not have the recursion eat up land cards, you know? Eating up lands sure is a red thing to do.

As for double strike and wither, those are just to better align the general in white and black. Double strike I think is very over-used in smashing face as hard a possible and its not used very often in the sense of "doubling combat triggers" you might get from effects like Mask of Memory. Plus the commander has a recursion effect so slapping double strike would make for an obnoxious voltron commander unless I really powered down the power. Let's also keep in mind, first strike damage + wither is a really nice combat synergy as it can be used to avoid lethal damage to your commander.

I mean, I know all that sounds all over the place but I feel there's a lot of different ways these could be expanded upon and as the player you could choose to devote to any one of them or you could try them all at once if you preferred. I like flexibility and even if this doesn't have a clear direction I think it definitely asks the player to make of it as they will. I would not slap this on a beginner-level commander product, but maybe a surprise card you'd expect to find in Modern Horizons for the more experienced player who really wants to put all kinds of mileage on a card.

I might be leaving some stuff out, but that's more or less my thought process regarding it. Oh, and I added life-gain because the sac ability was feeling a little too black in nature for dual white-black hybrid and heck it just provides another meaningless outlet you can choose to either build off of or to have as some extra insurance to last in the game. My real concern isn't if the design is too concise but if the design is too strong/broken. 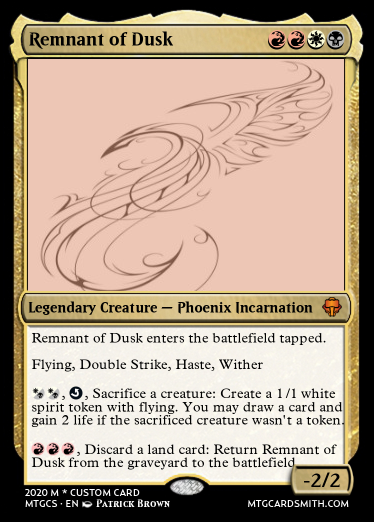 I have the feeling this might be too strong to be fair, but I wanted to run it by on what other people think.

Negative power is not a concept you see on most Magic cards, but for the most part it functions identically to 0 power, however; you'd need to give Remnant of Dust +3 power before it can start dealing combat damage. Ideally if this card is too strong I'd like to know how much negative power should be given to make it fairer if possible. Increasing the CMC and/or reanimation cost is another alternative as well.

Another uncommon mechanic this card features is wither which made its debut in the Shadowmoor set. Combat damage to players is treated normally, however; this creature deals damage in the form of -1/-1 counters to other creatures. It's more or less a water-down version of deathtouch.

Lastly it has an activated ability with an "untap" symbol which functions like the mirror opposite to the tap symbol. In order for the creature to activate that ability it must be tapped. Activating the ability then untaps the creature as part of the payment which prevents the creature from making multiple activations. In a way its like pseudo-vigilance but you got to pay for it.

I suppose all the mechanics make it some sort of monstrosity you'd expect to see in the Time-Spiral block, but I wanted it to have that feeling attached to it without going too overboard. Thoughts?

There are some spirit cards with some nice spooky art though.

As someone who plays CEDH the only gripe I have against proxies are low effort proxies. If you have a slip of paper on the card that only lists the name of your proxy and nothing else its going to be rather annoying for people to play with you. If you must play with proxies its 100% preferred you play with print-outs of the cards where the text is highly eligible. If you don't have access to a printer I'd suggest taking the time to write down all the information on a piece of paper with your absolutely best hand-writing. Not too many people like searching on their phone to see what any given card does. Even if you can recite the card's information entirely by memory there will be some people like myself who will still need to see the text just to be able to process all the information.

So long as your proxy card quality is good then I have no problems with you using proxies. In fact I would rather play against people running proxies than people who only build their decks out of their spare cards. Winning games is nice, but I'd rather play against evenly matched decks just so I can have a better idea about what aspects of my own deck I should try to improve. Playing against group hug or budget decks don't help me in this regard and it almost makes me feel like I'm some sort of a tryhard when in that kind of environment, so please proxy up the nastiest decklist you can think of. All that matters is proxy quality. I don't mind what ridiculously expensive or gross cards you proxy. Its fair game so long as I can read it.

The Edge of Autumn (Seasonal Theme-Deck)