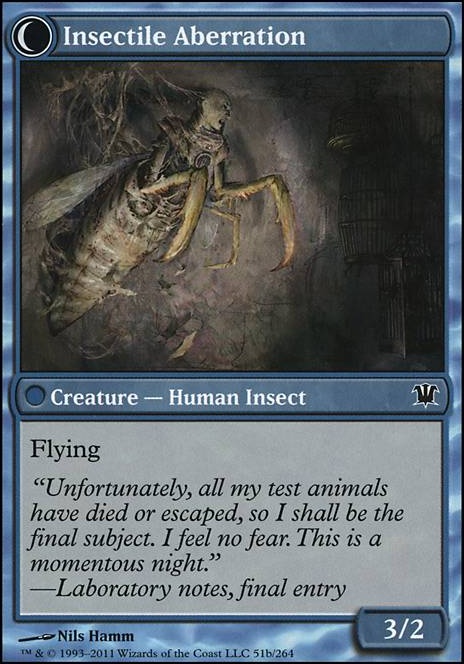 Tarmogoyf needs a lot of card types =/= a lot of instants/sorceries that are required to make Pteramander work.

Not to mention that Delver of Secrets

Flip needs as few non-sorcery and non-instant cards as possible, to allow it to become Insectile Aberration

which is also at odds with the needs of tarmogoyf.

Neotrup on Can Lazav transform?

Worse than that, if you somehow make Lazav, the Multifarious a double-face card, maybe by making a Delver of Secrets

Flip a copy of him, the way copy effects are handled keeps jumping through these hoops from actually paying off. Let's say you have your Delver of Secrets

Flip in your graveyard (so now it's almost back to being what's printed, except its named Lazav, the Multifarious, is legendary, and has a cool extra ability to change what it is). During your next upkeep you reveal an instant from the top of your library and transform your creature. It's now got it's Insectile Aberration

side face up, is still legendary, is still named Lazav, the Multifarious, still has the ability to copy other things, and is still a 1/1 with an upkeep trigger. Even though it transformed, it's still copying Delver of Secrets

Saljen good question! I spent some time thinking about Delver, but here's why I went with Swiftspear instead:

Neotrup on Can copies of cards transform?

Another point on this is that when the card leaves the battlefield it will no longer be a copy. If Clone is a copy of Golden Guardian  Flip and it dies after using the fight ability, the triggered ability will trigger to return it, but because it cannot be transformed it will remain in the graveyard on resolution. If Delver of Secrets

Flip is a copy of Golden Guardian  Flip (perhaps from something like Mirrorweave) and it dies after using the fight ability, the triggered ability will trigger and return it to the battlefield as Insectile Aberration, it will never be the land.

You're basically playing U/R Delver. Cut your creatures down to:

Then, switch a few of your spells around:

You also won't need so many lands. The ones you have are also kind of a problem because a lot of them always come into play tapped. Modern tends to have fewer turns than other formats, so you having lands that can never enter play untapped will lose you a lot of games. Any lands that do enter the battlefield tapped need to do something really good to warrant this. Therefore, I'd change:

You have more blue cards than red in your deck, so you'll want to play more blue lands than red ones if you can't get a hold on any dual lands.

Lastly, you should have some leftover slots from cutting creatures. More copies of Peek would be good. I'd also suggest Opt and Electrolyze for this last spot.

You may find Turn / Burn to be a bit heavy on the mana requirement. Consider replacing these with low-cost counter cards, such as Dispel, Negate, Spell Snare, Spell Pierce, Squelch, Chart a Course, or Remand. If you do cut Turn / Burn for one of these other cards, remember to cut another Mountain or two and replace them with Islands. Otherwise, you'll have too many games where you can't cast anything despite having 90,2183,989 bajillionzillion lands in play.

Lastly, you'll need a sideboard. These are the cards that are useful for your deck, but only against specific kinds of threats. You're allowed to swap cards in and out of your deck between games after the first in a match (tournaments are best 2-out-of-3).

2x Mizzium Meddler (for Boggles)
1x Counterflux (stops control and midrange)
1x AEtherize (you'll want these against aggro decks and tokens)
These four just get moved to your sideboard from your main since you only want them in specific situations2x Abrade (vs. Affinity)
3x Ceremonious Rejection (vs. Tron, Affinity, and Eldrazi)
1x Dispel (vs. Burn and control decks)
1x Magma Spray (stops Kitchen Finks and Dredge)
3x Tormod's Crypt/Relic of Progenitus/Grafdigger's Cage (you bring these in against any graveyard bullshit shenanigans)
2x Spell Pierce
1x Negate
(These last three are for beating Control, Combo, and Midrange decks, along with Burn)

From here, you should have a decent deck to take to your local shop to play with, but there's still some things you'll need:

Hope this helps! I'm sure I'm missing something that experienced Delver players can recommend.

The problem with all those cards is that they only work when Aluren is already out. Their contribution without it is very limited or downright nonexistent. This is especially true for noncreature cards in Recruiter lists, since the main tutor only finds creatures, so they have to carry most of the deck's weight. If you're running red, Ghitu Slinger is a good choice; useful against many threats like Insectile Aberration, Dark Confidant, Young Pyromancer and the like (and especially against Magus of the Moon), and with Aluren it's a kill condition.

Genesis Chamber looks interesting, it may have potential against control decks. Could be a nice sideboard card in the right metagame. Sadly I've never tried it.

Xica on The best cards not worth ...

Skaab Ruinator fails to be good due two factors:
- the opponent exiling the skaab is a real danger
- building a deck to have enough creatures to exile from the grave is too restrictive. (if it would ask for exiling any card, this card would be a staple of modern)
It would not compete with Insectile Aberration  Flip, since the delver can be removed a lot easier and is unable to play defense against fatties like Tasigur, the Golden Fang, the titans, death shadow, and the like.

I think the best budget blue deck you can make in Modern is either Delver or Tron.

Tron is trying to assemble the three tron lands Urza's Power Plant, Urza's Tower, and Urza's Mine (they are about a 1$ a piece). With these three lands on the battlefield you can play big creatures like Kozilek, the Great Distortion and Desolation Twin and Bane of Bala Ged and Cyclonic Rift. In the early game you play counters and tempo cards like Condescend, Repeal, and Expedition Map to find tron lands.

Delver is much more spell centric with Delver of Secrets being the all star which flips into Insectile Aberration  Flip. The other creatures are small evasive creatures with Ninja of the Deep Hours, Spellstutter Sprite, Faerie Miscreant, etc... the non creature spells are all tempo related like Vapor Snag, Deprive, Remand, Serum Visions, Opt.

I believe both of these versions can be built for 30$ and be budget competitive with room to grow and acquire more expensive pieces.