As long as Archangel of Tithes is untapped, creatures can't attack you or a planeswalker you control unless their controller pays for each of those creatures.

As long as Archangel of Tithes is attacking, creatures can't block unless their controller pays for each of those creatures.

Archangel of Tithes occurrence in decks from the last year 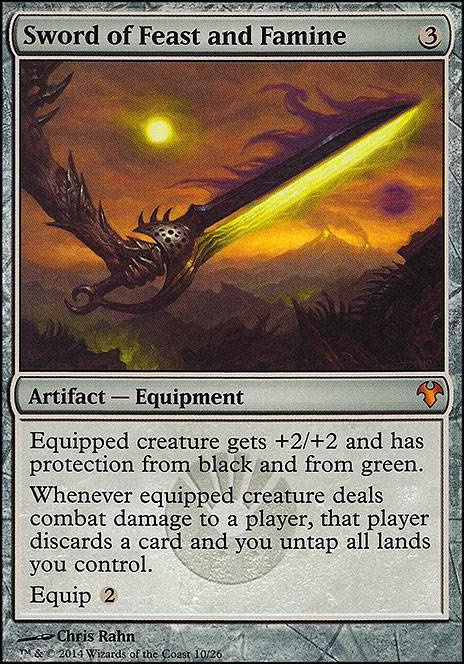 I had this idea that a Warden could be a Subtype.

Wardens are defined as typically Humanoid beings who specialize, in part or in whole, hieromancey.

WOTC, incorrectly, considers hieromancer to be the practice of essentially "law magic".

Well a Warden is someone who practices this magic, but it can extend out of white. Typically into black, and then blue - making it's dominate shard Esper.

At the beginning of your upkeep, tap target nonland permanent and put a prison counter on it. As long as you control Emak, permanents with prison counters on them can't be untapped.

When Yawgmoth's Watcher enters the battlefield, you may exile a creature card from target player's graveyard. If you do, that player can't cast creatures with the same name as long as you control this creature.

The price of flesh is best when it is scarce.

When Orzhov Enforcer enters the battlefield, choose a spell type. Whenever an opponent casts a spell of the chosen type, you gain 1 life and they lose 1 life.

"Your crime was being alive in the wrong place, at the wrong time. Your bond shall be paid in full, with blood."

Just a few examples of how Wardens would be designed.

Alms Collector and Loxodon Gatekeeper and Archangel of Tithes all seem to fit here. Maybe Aurification and by far my favorite white instant is Abeyance

I thing Caged Sun and Gauntlet of Power make sense in this deck, because even if you end up ramping your opponents with the double white mana, you get draw cards if they use it to cast multiple spells.