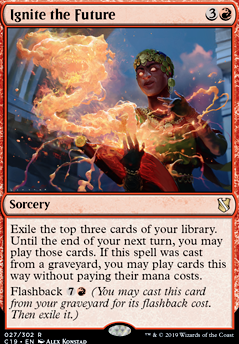 Exile the top three cards of your library. Until the end of your next turn, you may play those cards. If this spell was cast from a graveyard, you may play cards this way without paying their mana costs.

Ignite the Future is a solid piece of impulse draw (term for exile and casting for a brief period of time) that comes back later in the game for incredible value.

Nykthos, Shrine to Nyx is a strong ramp piece if you have a lot of colored permanents with mana symbols.

Thank you for the recs Peoyogon. I have been shying away from damge doublers for 2 reasons, one being that they cost too much mana (99 curve tops out at 4 cmc) and the other being the high risk of losing them to my removal heavy competitive meta. This deck is getting played against alot of cedh level decks like Kykar storm and Arcanis control etc. so its usually more important to hold up ineractions or wipe the board on my turn. lately Ignite the Future and Flamebreak have been kind of ineffective though so im going to swap them out for the best 2 non creature damage doublers. Even though they arent real card advantage it feels that way because then the one Bolt is worth two so we will see how this works.

Command Beacon - For when commander gets inevitably removed

Vance's Blasting Cannons - Doesn't hit lands, rarely will flip given the avg cmc in here is 4. Much better to be replace with different value such as Ignite the Future or even Light Up the Stage

Blast Zone - To get rid of enchantments

And although they don't park the exiled card(s) for the entire time until your next endstep as Furious Rise does, Syr Carah, the Bold, Tectonic Giant, Outpost Siege and the above mentioned planes walkers all do that exile-play thingy. But cards that are very similar to Furious Rise, are Ugin, the Ineffable, Ignite the Future and Commune with Lava which already have a spot in the 99