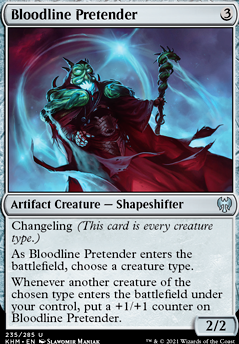 As Bloodline Pretender enters the battlefield, choose a creature type.

Whenever another creature of the chosen type enters the battlefield under your control, put a +1/+1 counter on Bloodline Pretender. 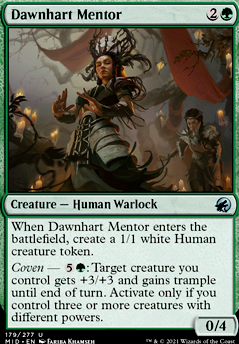 Rise of the Robots

i am trynig to bild a Contruct Tribal deck too. looks cool :D

janederscore run Bishop of Wings and think about Speaker of the Heavens , I know they are not angels but thay are more "angel tribal" than most angels, they are pretty cheap and they will add more value to the deck than the outcast or the segovian. Specially bishop, she's an MVP. It helps a lot holding the fort, activating Righteous passive and will give you tokens to keep giving them "papercuts" and blocking.

If you don't want to run bishop because it's not an angel I suggest you take out Resplendent Angel because you don't really have any way to trigger it but his own ability in the "probably too late" time and the 2 scrolls, and it's by far the most spensive card of the deck. With bishop and Seraph Sanctuary you can trigger it T3.

Out Bloodline Pretender and Paladin Class in Angel of Vitality and Cleric Class . They do comparable things, but I feel thay they will fit better and add more to the deck (assuming you put Bishop of Wings in, which you totally should). They will help you a lot reaching the 27 life mark for righteous (your biggest wincon for what I see) and for Speaker of the Heavens if you decide to play it.

Out scroll of Avacyn. In 2 Legion Angel and another 2 in the side. Surprisingly good. You don't need 5 life with all the gain you will get with the previous changes, more than enough to trigger resplendent many of your turns passively.

Youre most mana intensive cards are two 4cmc cards (4 with legion angel) , so your are OK with 23 lands. Take out a plains. Probably even take out two plains and add an Emeria's Call Â Flip (it doesn't add much anyway because you are rarely going to cast it and is a couple of bucks, so you can pass on that one if you want).

If you want to go even cheaper, just go mono white, most of the price is in the lands. Changeling outcast is not good enough, you should change it for one of the previously commented cards. And firgas retribution is not that good either. I've tried it and It's best part is the second hability but even that is not that good, because the creatures it allows you to kill are the ones that you could normally take care of in battle.and you rarely care about taking out blockers for the 3rd ability because most of your stuff flies. Put Starnheim Unleashed in, it's neither better or worse than friga's retribution as a finisher, and it will save you 50-60 dollars in lands.

Trying to think on the cheapest end of the spectrum that's how I'll probably both improve and cheapen the deck. I hope it helps!

Thank you for your comment! My playgroup is pretty casual, so I don't think Armageddon would be fun to include in the deck. I might get it for my sideboard, for when I play against more competitive people thou ;)

I actually got Door of Destinies and Coat of Arms , but I use them for my Pirate deck EDH - Admiral Becket Brass - Budget/Starter. Pirates are pretty weak as a tribe, so they kinda need the help ;) I think I might invest in a Mirror Entity that is one mad lad of a card, the Bloodline Pretender seems pretty cool as well, also fits the "theme" of vampires and blood.

I can't believe I didn't think of getting a Skullclamp for this deck, thanks for pointing that out. I bought one for a Teysa Karlov - Gift Deck I put together for the girl I'm dating, I should have gotten two!

I appreciate the tips, we'll see what I can find ;)