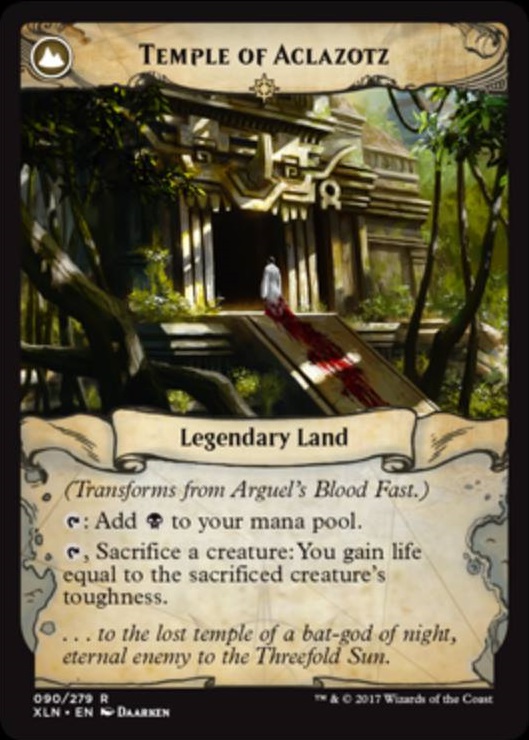 , Sacrifice a creature: You gain life equal to the sacrificed creature's toughness.

Omniscience_is_life - Profane Transfusion has been an interesting card to try to slot in. When it came out, I was excited because it seems to be exactly what this deck is trying to do. But the more I looked at it, the more I realized that it is just too expensive. Consider the closest thing to it with Reverse the Sands. Reverse the Sands, at , is one mana less, and hits all players. That is such better value then what Profane Transfusion offers. This deck doesn't really care about having one big creature, so it's not like there is extra value in having that, (unless the fringe moments where you have out something like Temple of Aclazotz).

I thought about switching out a number of cards for Profane Transfusion, and each time it just felt like it was too expensive to justify the switch. In the case of Soul Conduit, having the ability to instant speed switch life totals on a stick seems of more value in the long game than the one-time Sorcery speed effect of Profane Transfusion - even if it ends up costing more in the long run.

Hey, consider the four drop Saga tandem of Rite of Belzenlok and Scriptures? It's budget.

Rite can do a lot for control it can first make blockers, four of them and then it gives you a win condition a 6/6 flying Demon with trample. You're getting this 6/6 Demon for free, no additional mana needs to be used to get this creature and that's good with control. You can use all your mana to do other things for the turn while still getting a 6/6 Demon.

Rite also has nice synergy with Temple of Aclazotz which is a very good land for black control because of Dread Shade, pumping a ton of mana into Shade and then sacing Shade after it attacks for a ton of life. A similar interaction can be used with the 6/6 Demon from Rite. If you can't sac a creature at you're upkeep the Demon does 6 damage to you, before this happens if you don't have a creature you can sac the Demon to Aclazotz and gain life. The Demon also helps to lose life which lets Arguel flip into Aclazotz.

I really like your deck, I am just a bit confused over the usage of Temple of Aclazotz

. The temple cannot be played in the deck because it is a flip of Arguel's Blood Fast

Flip. With that being said I don't know if the flip condition is a desirable one to fit a place in your deck as it is sort of high risk high reward in my opinion but that is for you decide. Just thought I'd bring this to your attention. Cheers.

Arguel's Blood Fast used to be in the deck but I felt it was too mana intesive (1B) for the deck. After consideration I replaced it with Ad Nauseam which could give me a bigger boost of card draw for less mana. As comparison, although Greed costs more to cast, it's more efficient on the long run due to it's B activation cost. Regarding Arguel's flip side, it wasn't particulary easy to flip because most of the time you go under 5 life during your turn, so you'd have to wait a whole turn to flip it. Also, Ayli, Eternal Pilgrim comes with her own Temple of Aclazotz

Cabal Ritual is my 101 card, will probably end in the deck. Right now I don't have a way to consistently meet the Treshold requirement during the first 3 turns but the card is definitively playable.

I don't include targeted discard spells because I want to reduce targeted interaction with opponents as not to draw too much attention/hate. All the ones you recommend should be played in a more Competitive setting.

Yes, Reanimate instead of Animate Dead, will make the change.

Have you thought about adding Arguel's Blood Fast

Flip? It comes with card draw whenever you deem necessary. I don't know how its flipped side, Temple of Aclazotz

works with Horobi, Death's Wail but you probably won't ever flip it as its a may ability to begin with.