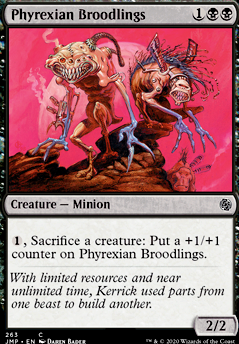 , Sacrifice a creature: Put a +1/+1 counter on Phyrexian Broodlings.

Boxfish Hey! I hope you had a wonderful weekend. I finished up a series of decks I had been working on just recently; saw I had some notifications regarding this deck and the new additions are beautiful! Necrotic Ooze can lead to a beautiful toolbox of effects. Especially if you pop a Viscera Seer or Woe Strider which pop up in a ton of sac engine decks; or to become a mana dork or combo piece if anyone runs artifact dudes. Heck Yeah!

Another speed tidbit, you might find something like Bloodflow Connoisseur slightly more efficient than Phyrexian Broodlings, but they are cute and flavorful.

Graveyard hate is. Rough. It feels rough when you don't have answers for it. When it's creature-based, great. Black mana is excellent for resolving this. But when it comes to destroying enchantments. Black struggles. Realistically it's just easier to make your opponent sacrifice them, which isn't often simple with some mono Black strategies. I wish I had useful advice for such endeavors. It's namely just suffocating out your competition with value you so you can lock them out, or answer their plays; and you've got plenty of answers that's for sure.

Be sure to keep an eye out for Dominaria United this September. It features a new Sheoldren card and a Phyrexian Invasion on Dominaria. I look forwards to using what comes out to make a flavorful Phyrexian-only Yawgmoth, Thran Physician deck to play against a Weatherlight Crew deck, Sisay, Weatherlight Captain I've been slowly making. Every card featured from a set specifically referencing the Weatherlight Crew and its characters (likewise for the Yawgmoth deck). So that I can recreate Yawgmoth's Vile Offering where Gerrard, Weatherlight Hero brings Yawgmoth Urza's head, as promised and depicted in one of the Phyrexian Arena arts. Gerrard betraying this promise uses Urza's head (still alize, magically) to use the Legacy Weapon in an attempt to defeat Yawgmoth once and for all.

Carrion Feeder is probably better than Phyrexian Broodlings in this list. Mortician Beetle might also be very nice. I'd prefer Defile over Vicious Offering , you really want to sacrifice things to your creatures. Generally look at Mono-Black Aristocrats decks, as those have pretty much the same game plan as you.