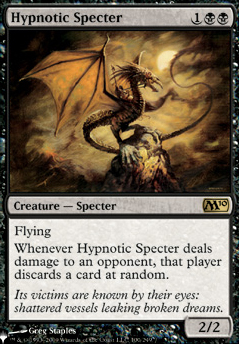 Whenever Hypnotic Specter deals damage to an opponent, that player discards a card at random.

I often find with discard decks that it is really hard to close out a game, even with Hypnotic Specters and the like. I would recommend taking the Abyssal Nocturnus out of the sideboard and into the main and adding a 3-4 Liliana's Caress.

Cool. Hypnotic Specter and Skullclamp might be good inclusions