Whenever an opponent discards a card, that player loses 2 life.

Wheel of Pain Reborn
by LeonSpires 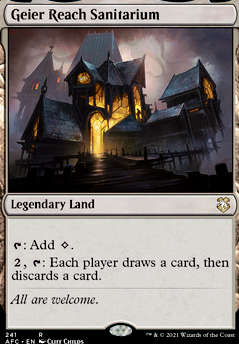 You would get both the zombie and the treasure.

Sacrifice, destroy, discard, and counter are all keyword actions that ultimately result in a card being put into a graveyard, however. If the card doesn't go there. The action was still performed. Kalitas, Traitor of Ghet modifies the result of the action, but does not replace the action with an entirely new one like Eligeth, Crossroads Augur does (replacing a keyword action is rare which is why the example seems so unrelated). This is in contrast to 'dies' which a player is never directed to have something die and does care where a card ends up.

Leyline of the Void won't stop triggers from Negan, The Cold-Blooded , Liliana's Caress , or Lullmage Mentor , nor change the number of cards Decree of Pain would cause you to draw. It will stop Fecundity from letting players draw cards.

A Boner of a Boondoggle

There was a new card that makes them discard 2, then exile their grave, you should definitely add it. It costs 2 colorless and 1 black. I forgot the name.

Definitely cut some less synergistic black good stuff for more relevant synergy and cheaper CMC to focus the deck. Idk your budget, your meta, what you struggle with (aside from artifact and enchantments). Providing this info will be helpful for others to provide suggestions

boozybenny: That card has existed for a long while, make sure to double check your spelling. Liliana's Caress .

joelrwood74: Those have now been submitted.

Liliana's Caress is better than Megrim but you want to deal damage via the Racks. So I would Cut megrim instead.

With how much discard you're running, I thought I'd suggest Megrim Liliana's Caress and Fell Specter so you can bleed your opponent to death. Works great with Dark Deal which is already in your build.