Psychosis Crawler's power and toughness are each equal to the number of cards in your hand.

Whenever you draw a card, each opponent loses 1 life.

Psychosis Crawler occurrence in decks from the last year

This is America
by gemmen99 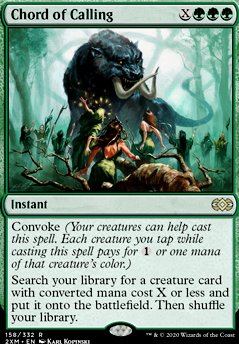 Thanks for the explanation TotesMcGoats! That makes a lot of sense and I hadn't considered that Kwain gives opponents some life back each time you use the ability. I also really like the flexibility of running those clones, great point there.

Sorry for all the questions, just trying to think through the build options and you seem to have put a lot of thought into this already!

Hi_diddly_ho_neighbor Unfortunately this deck was a challenge that specified that I couldn't have any cards over a dollar in the deck. These were great ideas though, and I somehow hadn't even considered Psychosis Crawler, but I am simply unable to put them in the deck. I am also aware of the high coverted mana cost; sphinxes are not the cheapest of creatures and I am considering cutting a few sphinxes to even out the mana curve.

I guess I missed Siani being spoiled, but these two partners have awesome synergy. You might consider adding in Gravitational Shift as a way to get more damage through and to blunt ground attacks. 1-2 of Laboratory Maniac, Thassa's Oracle, or Jace, Wielder of Mysteries could be a good additional win-con since you will be drawing a ton of cards. Or you could try the good ol' Psychosis Crawler win-con. All of those cards are less than $4 and give you that alternate route to victory you were searching for.

I do have one concern though, most of your creatures cost 5 cmc or more and you run only 5 ramp spells. There will be a lot of times where you struggle to get enough mana and/or keep pace with decks that ramp more aggressively. Plus I foresee times where you only have enough mana to cast one 5+ cmc spell a turn while everyone else has enough mana to cast multiple spells. I'd personally double the amount of ramp at a minimum, but you could probably go up to 12-13 ramp spells in a deck like this (there are plenty of budget ramp options that remain). Besides that, this deck seems pretty cool! +1 from me.

Love the Psychosis Crawler + Peer into the Abyss combo! Here is my take on Tinybones. It's similar to yours. Let me know what you think?