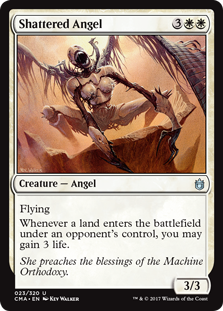 Flying Whenever a land enters the battlefield under an opponent's control, you may gain 3 life.

Shattered Angel occurrence in decks from the last year 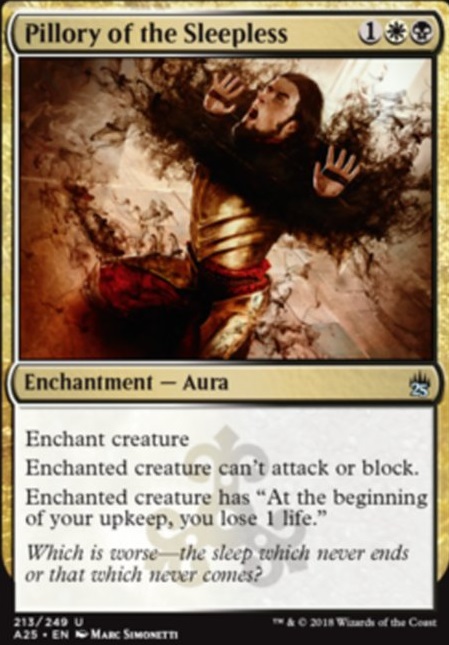 Heaven and Hell
by Darrin93

Take out Archangel of Thune, Herald of War, Shattered Angel, both Gideons, Chalice of the Void, and Ashes of the Abhorrent for more lands. Switch Aegis of the Gods for Leyline of Sanctity. I'm not sure what else to take out for more lands, but you need to get up to at least 36 in my opinion.

Ripwater Yea! They really did, I was so surprised! They worked out so well, I gotta thank you again!

ManaPickler OMG I have never seen Shattered Angel before and now I definitely want to add her! I always had an issue with Blind Obedience cause I could never have enough Mana for the Extort. But I think you're right: if I cut down some of the higher mana costing cards, I could probably streamline the deck a little more. Though, recommending me High costing cards dont help XD Def gonna look into Righteous Cause : I didnt realize that its ANY creature that attacks.

And to the both of you: Honestly? With all the good stuff coming in from M20, as well as some Juicy bits from Modern Horizon's I may just end up cutting most of the extra combo pieces: I only need at least 1 or two to go with Exquisite.

COOZCOOZCOOZ I just finished updating my Karlov list Uncle Karl and saw yours.

I fully agree with Ripwater about Sanguine/Exquisite combos, most playgroups I'm in will kill someone just for dropping one of the pieces. And its too easy, I don't run Aetherflux Reservoir for the same reason. But if your group is doing similar things, let 'em have it!

You could can definitely streamline your turn's by replacing your 5 & 6 drops with some cheaper CMC options.

Have you considered Shattered Angel of Blind Obedience for the extort and the fact that it normally puts opponents on tilt? If your really focused on the soul sister's, I would recommend Darien, King of Kjeldor .

The easiest way to allow a community to make a set, would be to make it as a combination of two sets together. This would allow people to draw on inspiration from both sets, and implicitly present design guidelines for the cards in the set: each card must feel like it would fit on one plane or the other, or a mix of the two, but nowhere else.

Let's roll with the Steampunk-Angel idea. Here's my solution:

If we look at the flavor text on Elesh Norn, Grand Cenobite : "The Gitaxians whisper among themselves of other worlds. If they exist, we must bring Phyrexia's magnificence to them." And we see the Planar Bridge was invented on Kaladesh, I vote we design this set with the theme of "a Phyrexian invasion on Kaladesh". We know New Phyrexia had angels, with Shattered Angel , Chancellor of the Annex and others, all in Elesh Norn colors, so we can justify the corrupted angel theme on a steampunk world.

Doing it this way, would solve all questions about setting, mechanics and lore in a way that any player would understand without having to read an entire thread of backstory.

RazortoothMtg on Need Help Taking Out 13 ...

What PieGuy said, but I disagree with cutting Shattered Angel. It can easily gain a looot of life, and that's not even counting any crazy ramp decks with things like Collective Voyage or Boundless Realms, or even smaller ramp cards like Rampant Growth or Explosive Vegetation