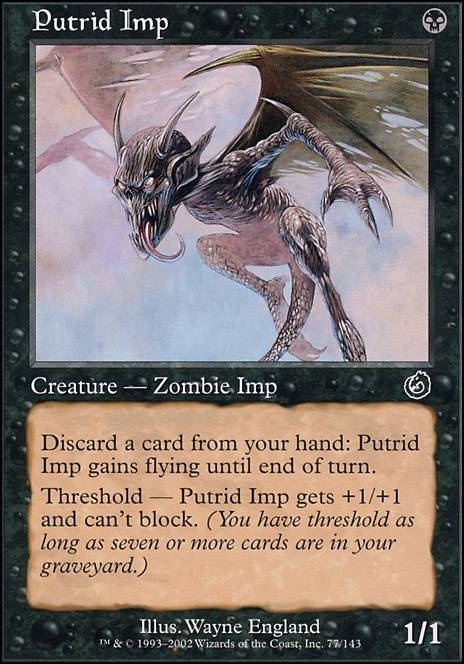 Threshold â As long as seven or more cards are in your graveyard, Putrid Imp gets +1/+1 and can't block.

Another Way to Lose Friends
by Nayru_Incarnate

Kess Fun and Games
by ACapo18

Living Death maybe? Putrid Imp would let you discard on every players turn if you want to fill up the graveyard and do a lot of dungeoning.

Curator's Ward to protect your boss? Vega, the Watcher for card draw every time your ability goes off.

It's a shame Library of Leng is over a dollar. That and Putrid Imp work well together.

Ojallday on When do replacment effects occur?

I've had different opinions expressed on this, but the question is when do replacement effects apply? Do they happen after the priority of what they are replacing happens or can they happen any time an event they could replace occurs? For example I have a Dakmor Salvage in hand, a Putrid Imp and The Gitrog Monster in play I discard dakmor triggering The Gitrog Monster's ability to draw a card. Does the draw trigger go though priority then the dredge? Or can dredge occur any time a draw is on the stack?

I played against this deck several times, and it won handily 3/5 times. The first time I played your deck, I beat it, but it didn't draw well at all - mostly swamps and the Putrid Imp without the other combo cards, so I won't consider that a fair test. The second time was closer, and I ended up losing to your Imp and the Heir of Falkenrath Â Flip, both being pumped up by discarding so they could fly over my small creatures. The other times I was just crushed, as planned :)

When the combo works in your deck, which appears to be most of the time (even the small creatures cycle out of the graveyard quite readily), it's unstoppable. It's almost impossible to come back from losing all of your permanents that early in the game. Makes me think the annihilator ability is broken, but that's only because you've built a deck that takes advantage of it so well. Nice work :)