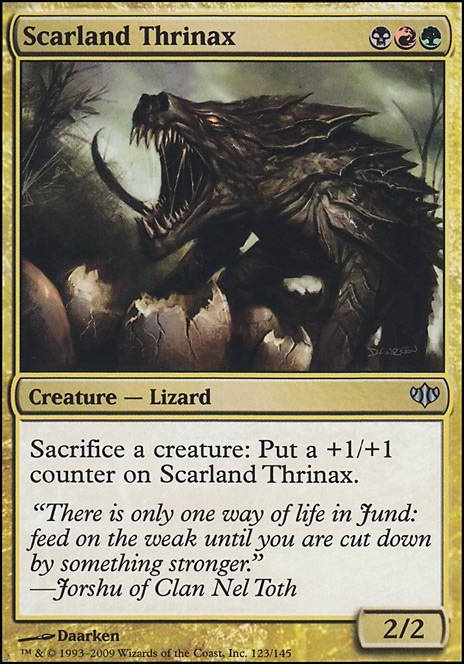 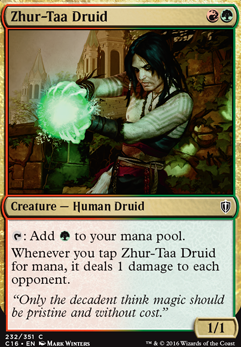 Kresh oops only creatures
by Gristicle

another one trash its just bad, and the commander is Scarland Thrinax. some kind of graveyard thing that didnt work out

Wow, "Flesh Thresher" is a ... visceral epithet(; love the description too.

This is a powerful list! I especially love the reliable token production this deck has, because even if somebody casts Nevermore on Kresh, that just means your worst case is a combo-y token deck, which can still be excellent!

As for potential improvements, I notice that the majority of your sacrifice outlets require mana, which can be a problem when trying to go off with Kresh and power him up for a lethal Chandra's Ignition (which is already a little mana-intensive). Sure, you'll win if you randomly draw Ashnod's Altar, but I don't want to leave that up to chance, which is why I include redundancy like Scarland Thrinax and friends, so that I'm more or less guaranteed to have free instant-speed shenanigans. I would cut some less relevant cards like Predator Ooze, Vona's Hunger, Darksteel Plate, or Anger that are great in a vacuum but don't directly support the sacrifice theme.

I've looked over every uncommon ever printed and the only decent commanders are Scarland Thrinax, Sprouting Thrinax, and to a lesser extent a battlemage-like dude

There are no purely green creatures that do what you want, so you wouldn't be able to cast them without Green Sun's Zenith.

There are a few more, but they require additional activation costs.

more cards that I think you should consider:

Thanks for the kind words landofMordor! So after I said I was looking for two more sac outlets, I decided to put Carrion Feeder in to give a try, I am wanting to get my curve as low as possible so that the deck can pick up a little bit quicker. I'm going back and forth between Scarland Thrinax and Bloodflow Connoisseur. My struggle feels a little silly; I love the flavor text on the Thrinax and I like that he enters the field as a 2/2, but the Connoisseur feels like it may be a slightly easier cast since I only have to have two colorless and a Swamp. I'm thinking I may just buy both and try each out to see which fits better since they are cheap cards. I'm glad you like the Phytotitan choice so much! I really like it, and have wanted to make use of the card for a while but didn't see where he would be useful. Enter Kresh. I was play-testing yesterday and had a silly amount of counters on Kresh because I had Death's Presence, Kresh the Bloodbraided, Phytotitan, and Carrion Feeder on the board. It was glorious.

I'm not sure I agree with you on the Rakshasa Deathdealer being a weak point, I'll need you to clarify your logic on that one. I like the fact that I can pay his regenerate cost and sac him to feed Kresh just to do it again. I don't know, I may find in games that I want that mana for something else. We shall see. In playtesting, I was actually less pleased to see Reaper of the Wilds. Again, I may change my mind after playing some actual games. I don't plan on changing too much until after I have tried it out beyond taking out Fireshrieker for either a sac outlet, Mycoloth, or Sifter of Skulls. And Terastodon will be coming out for Bane of Progress, like I said in my previous comment.

Out of the counter synergy cards you suggested, I think I like the Ridgescale Tusker the best out of the budget choices. I really.... really.... like Nissa, Voice of Zendikar, but then I am a big fan of repeatable stuff in my EDH decks. I may end up caving and purchasing a copy of her, it depends on when she rotates out of standard. I could not find a date on that.

Oh yeah, I was really curious what your thoughts are on Kumano, Master Yamabushi, Ulvenwald Tracker, and Kalitas, Bloodchief of Ghet. I'm not sure how I feel about the Tracker, 1/1 creatures always feel so fragile to me. Especially in a world where you have Atraxa and people that run Contagion Engine..... I hate the Engine. Especially when playing my Alesha, Who Smiles at Death deck.

No worries on your response time! I have entirely too much time on my hands man. I got out of the Army last year and right now I am just going to school two days out of the week and interning at a chiropractor's office 3 hours a night 3 days a week. Idle hands are the devil's playground and all that ya know.